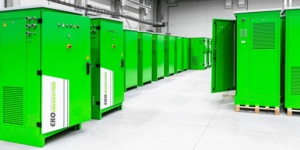 The Polish charging infrastructure provider Ekoenergetyka has received another major order. The Paris-based public transport operator RATP has commissioned Ekoenergetyka-Polska to supply electric bus chargers with a total capacity of around 24.5 megawatts.

RATP is buying 274 chargers from Ekoenergetyka, each with 90 kW of power, as part of its electric bus offensive. According to the Polish company’s announcement, RATP will receive a customised solution. In two depots (Centre Bus de Lilas and Pleyel), the charging stations will be available in three configurations.

Ekoenergetyka Vice President Maciej Wojeński describes this adaptability of the charging solution as one of the biggest advantages. “We adapt our charging stations to specific customer requirements, both technically and visually,” says Wojeński. “We are preparing a modern charging infrastructure for electric buses, which will be located in Paris, in accordance with the requirements of RATP.”

Public transport operator RATP plans to purchase up to 800 electric buses by 2024. Only at the beginning of January 2021, the company ordered a total of 109 e-buses in two orders from the French electric bus manufacturer Bluebus.