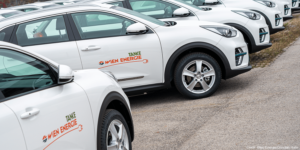 Energy supplier Wien Energie has purchased 48 Kia e-Niro electric cars for its sales staff. This means that a total of around 70 e-cars are now on the road for Wien Energie and thus the majority of the car fleet of around 100 cars.

The utility has set up almost 70 chargers in its company garage for the significantly enlarged electric fleet, which exclusively supply green electricity. Meanwhile, the large-scale acquisition is to remain only an interim stage. Wien Energie has already announced its intention to increase electric vehicles’ share in its fleet step by step.

“Electromobility is an important building block for more climate protection in the city. Wien Energie is focusing intensively on expanding the charging infrastructure and today operates the densest charging network in Vienna. Converting our own fleet is, therefore, a logical step,” says Michael Strebl, Managing Director of Wien Energie. “Well over 90 per cent of car journeys are shorter than 50 kilometres. An average electric car can easily cover this distance five to six times per full charge.” Strebl emphasises that they also want to send a signal to other companies to make the switch in the interest of climate protection.

Wien Energie is known to be responsible for the expansion of public charging infrastructure in Vienna. In a major project started at the beginning of 2018, the utility has built 1,000 public charging points in the Austrian capital. Besides, Wien Energie also operates hundreds of charging points in semi-public areas in the greater Vienna area, such as in underground car parks, supermarket car parks or at railway stations. In the course of its own fleet electrification, the company also points to the fact that it has special charging solutions for businesses in its portfolio.

Solaris writes yet another Trollino order in Romania