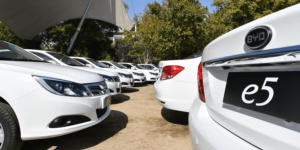 The Chilean government has launched a new program to promote electric mobility in taxi services. The ‘My Electric Taxi Program’ provides co-financing of up to $ 11,000 to owners of current gasoline-powered taxis to renew their vehicles for purely electric BYD taxis.

The Minister of Transportation and Telecommunications, Gloria Hutt, pointed out that: “our priority in terms of electromobility is public transportation and to promote the inclusion of vehicles such as taxis and buses. Initiatives like this, plus others that we boost from the Ministry of Transportation, are accelerating more sustainable fleets with significantly lower operational costs. Besides, the new vehicles have improvements in comfort for users, mainly due to smoother and quieter travels”.

This most recent Chilean initiative also includes the purchase and installation of home electric chargers. The Energy Sustainability Agency, who will also advise operators on their applications will also implement the new vehicles’ operation monitoring for one year.

Ignacio Santelices, Executive Director of the Agency, pointed out that  “an electric vehicle has cheaper maintenance than conventional vehicles. Therefore, it is economically and environmentally convenient.” He says that operating an electric taxi means savings about 70% compared to a gasoline vehicle.

Chile is especially well-positioned for decarbonising its transport sector since the country boasts one of the world’s largest lithium deposits. Earlier this month, SQM (Sociedad Química and Minera de Chile) entered into a long-term agreement to supply lithium products to LG Energy Solution, the recently independent battery division of LG Chem. The contract is expected to run through 2029.

However, BYD is itself a battery producer. The company backed by financier Warren Buffet was founded in 1995 as a battery producer, whereas the BYD Auto division responsible for electric buses and cars only began in 2003. In South America, the group has already opened a plant to build LiFePO4 battery modules for electric buses in Manaus in the Brazilian state of Amazonas as reported, which is primarily used to make batteries for buses.

BYD has delivered the 50 electric cabs to Chile. An expansion of the program to other cities in Chile is already planned. The program will subsequently be rolled out to other Chilean cities, such as Valparaíso, Aysén and Los Ríos. The promotion is also to be expanded in the Santiago de Chile metropolitan region itself.