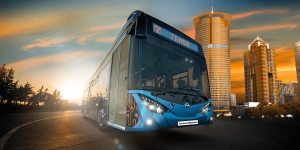 Turkey’s Temsa has started producing battery packs for its e-buses at its plant in Adana. By 2025, the Turkish manufacturer wants to cover more than half of its bus volume with electric vehicles.

Temsa, a subsidiary of Sabancı Holding and PPF Group, has two electric bus models in its portfolio, unveiled at UITP in Stockholm in 2019. Subsequently, Temsa had exported its first six electric buses to Sweden.

In the latest announcement, the company said that as of now, they would also assemble battery packs for all of the brand’s electric vehicles at the facility in Adana. Temsa left undisclosed where they source the cells.

“Today, we consider Temsa as not only an automotive company but an automotive-oriented technology company. Now we are developing and manufacturing the battery packs we use in our electric vehicles, with our own engineers and our own R&D team at Temsa’s Adana plant,” underlined Cevdet Alemdar, CEO of Temsa.

The executive also foresees Temsa selling e-buses in the US. “TS45 is our popular model in the United States. We are in the process of producing the electric model of this vehicle.” The company also said they were testing the zero-emission version of the bus in California as you read.

According to Alemdar, Temsa has exported 12,000 vehicles to 66 countries worldwide, and he claims Temsa to be in among the Top 5 in the US with 1,000 vehicles delivered. While this may seem exaggerated, the CEO also pointed out the UK, Italy, and Germany as markets and plans to “grow fast in Central and Eastern Europe also through the strength of our partner PPF and Skoda Transportation.” PPF is an investment company based in the Czech Republic. Dedicated subsidiaries in Germany, France and the USA support sales and after-sales services.

By 2025, Temsa aims to cover more than half of its total bus volume with electric vehicles with exports to account for about 80 per cent. In the short term, the Turkish OEM plans to achieve “a business volume two to three times larger than that of the previous year.” The company also aims to spend around four per cent of its sales on research and development each year.

At the moment the Temsa e-bus portfolio includes two models, the 12-metre Avenue Electron and the 9-metre MD9 electriCITY they say they designed for tougher and narrower road conditions.

Temsa’s production site in Adana has an annual production capacity of 10,000 vehicles (4,000 buses and 6,000 light trucks). PPF Group and Sabanci Holding each hold a 50% stake.