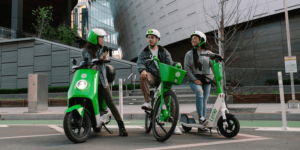 Lime is adding electric mopeds to its micromobility platform and said it plans to launch as many as 600 LEVs on its platform in Washington D.C. this spring. The company is also working with authorities to pilot the mopeds in Paris.

In Paris, Lime is one of only three operators allowed to rent out vehicles together with Tier and Dott. Lime said they would eventually offer the new electric mopeds all painted in signature green in a “handful of cities” over the next several months – which remains unclear.

Niu supplies the electric scooters. The company is among China’s largest LEV manufacturers and has increasingly expanded to overseas markets. The mopeds will have a top speed of 28 mph or 45 kph as is usual in the category. Lime claims a range of up to 87 miles or 140 km on a single charge. Unlike Lime kick-scooters, in which gig economy workers can earn money by collecting, charging and bringing back to city streets, full-time employees will maintain the mopeds and swap the batteries.

As different safety rules apply for renting electric mopeds, there is tech to ensure riders are wearing helmets. Lime added infrared-cameras in the helmet compartment that can detect if they’re in use during a trip. Customers will also have to take a selfie wearing the helmet at the start of a ride.

Lime first indicated last October that they were looking to branch out, including the addition of third-party companies to its platform. One of these was Wheels, a company that already offers electric mopeds in Berlin. Lime CEO Wayne Ting said, at the time, that users should expect more partnerships like these.

The expansion into mopeds may be a sign of recovery of an industry that struggled. Lime underwent a round of layoffs in March/April 2020 when they had to suspend service. In May the took money from Uber that acquired a stake in Lime together with Google’s parent company Alphabet. Lime also took over Uber’s business with e-bikes and e-scooters under the Jump brand in this context.