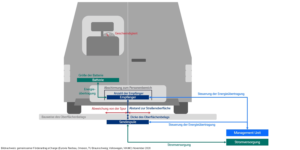 Israel’s Electreon has joined the eCharge project conducted by the TU Braunschweig with funding through the German government. The consortium also includes Volkswagen and Eurovia. Electreon will deliver its wireless in-road charging technology.

The eCharge partners aim to develop a cost-effective solution for inductive charging of electric vehicles while driving with the German government spending €1.9 million in funding. The partners planned to integrate modules into asphalt when announcing the project, and this is where Electreon comes in.

The Israeli startup is now a subcontractor supplying their existing wireless dynamic charging technology. They said they would also take on other project tasks. For example, Electreon will integrate its wireless vehicle receiver to a Volkswagen electric vehicle tested on the Electric Road. The strip will be built at DuraBASt, the German national road test facility, near Cologne.

“Inductive charging offers a lot of potential here,” Dr Nikolai Ardey, Head of Volkswagen Group Innovation, explained the company’s initiative. He believes that they could, in principle, use it in all vehicle segments from cars to trucks. “With this project, we want to understand the technology better and examine its possibilities in comparison to the alternatives,” Ardey said.

The project team also wants to research billing methods and economical modes of operation as well as construction. If eCharge turns out a success, they could build various “E-Corridors” on German motorways at regular intervals and 25 kilometres long. According to TU Braunschweig, these could lead to a 20% range extension per corridor.

ElectReon, looking at the federal involvement and mighty partners and potential, says it is now setting up a German subsidiary. Oren Ezer, Co-founder and CEO of Electreon, considers Germany a “global leader” in transport and an “entry point to the European and global markets.”

The company already has ties to the country. ElectReon is working with Eurovia and utility EnBW reportedly. Eurovia is also part of eCharge and onboard for the road construction.

Electreon’s German subsidiary will be headed by Dr Andreas Wendt, who was previously responsible for Toyota’s wireless charging efforts in Germany.

The results from eCharge may also feed Electreon’s other pilots in Sweden and Israel or Italy. The scientists in eCharge will look for example into novel road construction materials for the charging technology’s damage-free integration and operation. Road pavements’ service life with this new technology and the possibilities for road maintenance are other crucial areas of research.