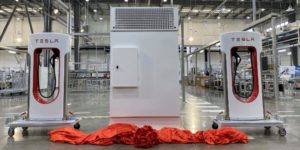 Tesla has officially commissioned its charging infrastructure production facility in Shanghai to build the Supercharger V3 for China. Media reports are also circulating that Tesla could buy into BYD – but the latter denies this.

Supercharger stations of the 3rd generation will be manufactured at the new facility, as Tesla China announced via its Weibo account. According to an earlier report, the Shanghai plant can produce up to 10,000 charging stations per year. At the time, however, it was not yet clear whether Tesla would only manufacture Supercharger oo the AC wall box “Wall Connector” for destination chargers or private customers.

According to Tesla, the production facility’s construction started in August 2020 and was thus completed in about half a year. The Reuters report from November 2020 also mentioned February 2021 for the completion of the factory – so the deadline was met.

Assuming 10 stalls per Supercharger location, the new factory’s chargers could theoretically equip up to 1,000 new locations per year. By way of comparison, 743 new sites with 7,173 charging points were built worldwide in the entire year 2020. With an additional capacity of 10,000 charging points, Tesla could more than double its global expansion.

Initially, Tesla built the Superchargers at its main Fremont plant. But with the switch to the V3 Superchargers, assembly was moved to the Gigafactory New York – the solar division’s (formerly SolarCity) plant also manufactures the photovoltaic roof shingles.

Meanwhile, media reports circulate that Tesla wants to buy into the Chinese vehicle and battery manufacturer BYD. According to these reports, 20 per cent of the company’s shares are being discussed for a reported sum of 36 billion US dollars. The South Korean newspaper Chosun had picked up on corresponding reports from Chinese online portals. Among others, the BYD environment was named as the source.

Tesla is said to be less interested in BYD’s electric cars than in its battery production. BYD once started as a battery producer and only began building cars later. With the ‘Blade Battery’, the Chinese manufacturer has a modern LFP battery, which, unusually for LFP batteries, is said to have a higher energy density than lithium-ion batteries with NCM cathode.

However, BYD denied the rumours to the Chinese news agency Sina. Tesla has not commented on the reports.