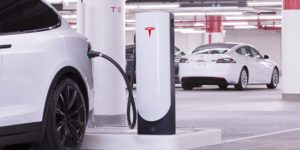 In China, documents that Tesla submitted to authorities in Shanghai were made available to Reuters news agency. These reveal that the company is planning to manufacture up to 10,000 charging stations per year in Shanghai. Currently, Tesla charging stations sold in China are imported from the USA. The 42 million yuan (5.36 million euros) factory is apparently already scheduled for completion in February 2021.

What is not yet clear is exactly which chargers will be built at the new Shanghai plant. Reuters writes that the chargers imported so far are “normally installed in charging stations or parking garages”. A formulation that leaves room for manoeuvre: This could only concern the DC rapid chargers for supercharger stations since these are also sometimes installed in parking garages. However, it is also possible that Tesla will also manufacture the AC wall box Wall Connector there for destination chargers for private customers. Most US media outlets seem to be assuming that the chargers manufactured in Shanghai will primarily be superchargers, though of course, it could also be both.

The expansion of the charging network in China is just as important for Tesla as the expansion of its production capacities. This year was the first full year with an initial ramp-up phase in the spring where over 150,000 Model 3s were built at Giga-Shanghai. In the coming year, more than 300,000 Model 3 will be built for China and export markets, and 250,000 Model Y will be built in the extension building.

Even after the current increase, both vehicles will still cost less than at the beginning of 2020. Tesla lowered the prices for both series in May, July and October. The reasons for the price increase are entirely unclear. It is possible that Tesla will change the equipment scope. Since vehicles ordered now will be delivered in March 2021 at the earliest, a change is quite possible. This being said, the configurator does not yet contain any new features, which does not necessarily mean anything at Tesla.

Over in the USA, Tesla is suffering two recalls: 9,136 Model Xs have to go to the workshop because covers of the glass roof may come loose, while another 437 Model Y have to be taken to Service Centers. The problem with the Model Y is that the screws connecting the upper wishbone and the steering knuckle may not be tightened to specification and have to be checked.