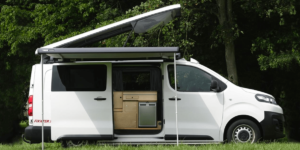 VDL Bus Venlo will become an industrial partner of Camperfixx, a camper builder from Friesland. VDL will build compact electric campers based on the almost identical vehicles Peugeot Expert, Toyota Proace, Opel Vivaro and Citroën Jumpy. The first model is scheduled for completion in February.

At least 30 electric vehicles are planned for 2021 for the Dutch market alone. These will be distributed by Camperfixx. VDL Bus Venlo is a subsidiary of VDL Bus & Coach.

The vehicle is called the ‘e-Fixxter’ in the announcement and is said to have a range of “around 300 kilometres”. This makes it clear that we are talking about the larger 75-kWh battery of the PSA models, as the 50-kWh battery only allows ranges of around 230 to 240 kilometres. The 75 kWh battery is only available in the two longer lengths of 4.95 and 5.30 metres, and according to the announcement, the two partners also want to offer their customers both length versions.

Both versions are to be available with equipment for four or optionally five people. The rear seat bench is movable and can be converted into a wide bed in just 10 seconds. There is ample cupboard space and the kitchen is equipped with a refrigerator. An extra-wide bed can be installed in the pop-up roof. VDL has made no changes to the drive, so the driving and charging performance should be the same as the basic models. Only the range (otherwise around 330 kilometres) is given as the aforementioned 300 kilometres because of the weight of the fittings.

According to VDL Bus Venlo, the electric camper van fits in with the strategy of expanding the department for special vehicles: So far the company has converted diesel vans into campers, but also emergency buses and patrol cars for the Dutch police or the Medibus, a mobile medical practice. “We have a great deal of experience in converting vehicles,” says Mark Francot, managing director of VDL Bus Venlo. “[…]which enables us to build the electric camper exactly as Camperfixx wants it.”

Anno Huidekoper, CEO of Camperfixx, describes compact electric campers for four or five people as a gap in the market that they want to fill together with VDL. “We focus on active young families and people who are approaching retirement and looking to enjoy their well-earned rest,” says Huidekoper. “Increasingly, these target groups also have the explicit desire to go on sustainable holidays.”