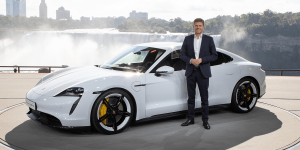 Porsche has found a replacement for Cayenne series manager Manfred Harrer, who left for Apple to work on Project Titan. Stefan Weckbach used to be the chief developer of the Taycan electric model and will now take over responsibility for the large SUV series.

A Porsche spokesperson confirmed the appointment to the German Automobilwoche. As the Cayenne series’ new head, Weckbach will develop the next generation of the SUV model. The current generation, which is available in several PHEV variants, among others, was first presented by the VW subsidiary in 2017. A model change would therefore be due in 2024 or 2025.

Weckbach was head of the electric project at Porsche since 2016, which was initially known to the public as ‘Mission E’ – the model name Taycan was only given later. In this role, the manager and his team not only had to develop a model from scratch but in doing so, despite the drive technology and the heavy battery, had to ensure “that it has to be a real Porsche”, as Weckbach himself repeatedly emphasised in the run-up to the 2019 premiere.

Porsche has recently been more than satisfied with the launch of the Taycan: In 2020, the company based in the German city of Zuffenhausen was able to deliver 20,015 units of the Taycan built at its main plant. Last summer, Porsche even had to borrow 400 employees from Audi’s Neckarsulm plant to better meet the high demand for the electric sedan.

Harrer, an accomplished chassis developer, reportedly moved from Porsche to Apple a few months after his promotion to Cayenne series manager – apparently to work on the tech giant’s ‘Titan’ programme. His exact function there has not been made public. In addition to his main focus on chassis, Harrer was also active in a supporting capacity at the VW Group’s Cas Software Org.

Weckbach’s successor as head of the Taycan series has also been filled internally: Kevin Giek, currently head of procurement for new vehicle projects, will take over this function on 1 April.