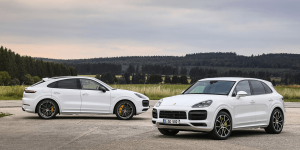 Since the first version of the model series, the Cayenne E-Hybrid, can also be ordered again, a total of four different hybrid versions are now available from the Cayenne series. As with the Panamera, Porsche distinguishes its two hybrid drive trains by adding the name “Turbo S”: the “simple” E-Hybrid combines a V6 petrol engine with an electric motor and has a system output of 340 kW. The Turbo S E-Hybrid, on the other hand, uses a four-litre V8 engine with a system output of 500 kW. Both drives are available in the Cayenne and Cayenne Coupé.

However, the electric range is somewhat disappointing: it is just 40 kilometres. Depending on the equipment, the car has a consumption of 3.7 to 3.9 litres per 100 kilometres, the electricity consumption 18.7 to 19.6 kWh. In its press release, Porsche unfortunately only states values that were calculated back to NEDC – and not the new WLTP values.

The data look much better when charging: While many plug-in hybrids do not achieve more than 3.7 kW charging power, the AC onboard charger in the Cayenne delivers up to 7.2 kW. The 14.1 kWh battery is fully charged in 2.4 hours on a 400 volt line with 16 amps. This takes six hours at a household socket with 230 volts and 10 amps.

Since it is not only the performance that is the top model, the Cayenne Turbo S E-Hybrid and its coupé offshoot are extensively equipped at the factory: an electric roll stabiliser, a rear axle cross lock, a ceramic high-performance brake and the Sport Chrono package are standard features on board. Other features include LED headlights, camera-based pedestrian protection and app-controlled air conditioning.

In September, Porsche plans to present its first electric car, the Taycan. Not only the development of the new model on its own electric platform was expensive, but also the conversion of the plant in Zuffenhausen. As it became known on Monday, the sports car manufacturer has placed a green promissory note loan amounting to one billion euros. The tranches have terms of five, seven and ten years and were offered with both fixed and variable interest rates.

According to CFO Lutz Meschke, the high demand led to an increase in the original order book volume. According to Porsche, the money will be used exclusively to refinance sustainable projects – including energy-efficient, resource-saving production facilities and development costs for new models.