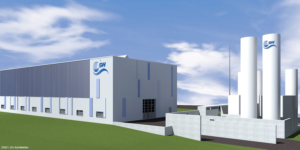 In Germany, the Centre for Solar Energy and Hydrogen Research Baden-Württemberg (ZSW) in Ulm has broken ground for the HyFaB research factory, an open industry platform with a focus on fuel cell stacks. Commissioning is planned for the beginning of 2022.

Alongside the ZSW, the Fraunhofer Institute for Solar Energy Systems ISE in Freiburg is involved in the project as a scientific partner. The researchers say that the HyFaB research factory is going to steer and accelerate the transition from small-scale to mass manufacturing. The researcher’s work will focus on scalable component production processes that are suitable for assembly lines, as well as on fuel-cell stack manufacturing processes.

The ZSW says that the target group of the planned research factory as companies that need orientation for entering fuel cell technology and support in the development of materials, components and production machines, such as players from the automotive and fuel cell industry or from mechanical and plant engineering. Above all, the supplier industry is to be strengthened.

The groundbreaking ceremony signals the start of construction for a new building at the ZSW in Ulm with an area of 3,300 square metres. The new building is being constructed on a neighbouring property. According to the initiators, the project will set standards in hydrogen fuel cell production research. In the future, automated production and quality assurance processes, factory acceptance tests and commissioning of FC stacks will be researched in the facility. The ZSW also wants to train specialists on-site and generate industry knowledge. The state is funding the project with 18.5 million euros (10.5 million euros from the Baden-Württemberg Ministry of Economics and just under 8 million euros from the Ministry of the Environment).

“We are already working with leading fuel-cell manufacturers in Germany and are aware of the industry’s urgent needs. The new HyFaB research factory will enable us to pave an even better path to tomorrow’s mass fuel-cell manufacturing,” says Prof. Dr Markus Hölzle, ZSW board member and head of the Electrochemical Energy Technologies Division in Ulm.

Incidentally, HyFab is the project that the state of Baden-Württemberg set up after losing the bid for the battery cell research project. Instead of battery cells, research will be conducted in the southwest on the use of hydrogen in cars. The Ministry of the Environment announced in a press release at the end of 2019 that a total of about 74 million euros would be needed to realise the research factory.

LG Chem wins one legal fight in the battle with SK