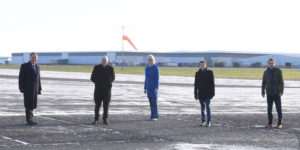 In addition to the cell factory planned by Britishvolt, another battery ‘gigafactory’ could be built in England at the airport of the industrial city of Coventry. The Coventry city council announced intentions to develop corresponding plans together with Coventry Airport.

By means of a PPP (private-public partnership), the city, the metropolitan region and the airport want to apply for preliminary planning permission by the end of 2021 in order to win over an experienced manufacturer for the start of production by 2025. For this purpose, the initiators are founding a joint venture that is to prepare the “nest” to be able to quickly implement the construction of a Gigafactory later on. The background to the measure is that the British government has identified investment in battery factories as a key objective to secure jobs in the automotive industry.

An additional UK battery factory is also given new urgency by JLR’s plans announced yesterday: Jaguar is to be transformed into an all-electric car brand by 2025, Land Rover to launch six all-electric models from 2024. The Guardian quoted JLR chairman Thierry Bolloré saying: “If there might be one day a battery plant or several plants, why not in the UK? We would be very, very glad. It would make a lot of sense in terms of supply chain to be close by any battery plant.”


The West Midlands, with Coventry as its industrial heart, is home to several car manufacturers, including Jaguar Land Rover, but also Aston Martin Lagonda, BMW and LEVC. The planned joint venture should now improve the attractiveness of the region as an investment location and at the same time drastically reduce the time that will be needed later for the commissioning of the hoped-for gigafactory. In addition to the preliminary building permit, the initiators are seeking parallel talks with battery suppliers and the regionally-based car manufacturers in order to “secure the necessary long-term investments”, according to an accompanying press release.

The release also emphasises the proximity to research facilities already based in Coventry, including the UK Battery Industrialisation Centre, and an already formed supply chain. “Our joint venture partnership is unique in the UK and creates a strong platform to attract investment and create more than 4,000 new jobs, support our automotive sector and secure our competitive advantage,” said George Duggins, leader of Coventry City Council.

The UK government has promised up to £500 million (around €573 million) in stimulus funding as start-up funding for a Gigafactory in the UK. “In due course” the initiators from the West Midlands announced. Currently, there is only one other concrete initiative to build a Gigafactory in the United Kingdom: the start-up Britishvolt has secured the rights to a site in Blyth near the Nissan plant in Sunderland, but according to The Guardian, it still has to secure the financing to start construction.

Update 15 July 2021: The planning application for the planned Gigafactory at Coventry Airport has now been submitted. The 530,000-square-metre plant will not only produce but also recycle batteries and create 6,000 new jobs. A decision on the project is to be made before the end of the year. This is reported by various media. The initiators expect the construction of a Gigafactory at this strategically important location to stimulate private investment of up to 2 billion pounds (about 2.3 billion euros). InoBat Auto is still under consideration as a partner, as well.

“It’s mission critical that the West Midlands secures a gigafactory, both for the future of our region’s automotive industry and the huge economic and job benefits it would bring, as well as the future of our planet,” said West Midlands mayor Andy Street. “The West Midlands is already home to the country’s biggest car manufacturer, Europe’s largest research centre of its kind, the UK’s only battery industrialisation centre and a world-leading supply chain. A gigafactory therefore is the natural next step for the UK’s automotive heartland, and I will not rest until we have secured one.”

Italvolt to set up 45 GWh cell production in Italy