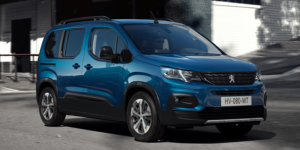 PSA continues their electrification initiative with Peugeot giving the Rifter van an electric drive. The high-roof family van with up to seven seats will be launched on the market in autumn 2021 as the e-Rifter, which includes familiar PSA drive technology.

In Peugeot’s model portfolio, the Rifter is the passenger car counterpart to the smaller Partner van, for which the electric version has also already been announced for autumn 2021. At Opel/Vauxhall, the double is called Combo-e Life (passenger car) or Combo-e Cargo (commercial vehicle), at Citroën it is the ë-Berlingo and ë-Berlingo panel van.

The Vitesco electric motor with 100 kW output is coupled with a 50 kWh battery in both versions of the Peugeot e-Rifter (standard and long), which should enable WLTP ranges of up to 280 kilometres; the 75 kWh battery is not available here. Like its PSA siblings, the e-Rifter can tow up to 750 kilograms braked on the trailer hitch.

An on-board charger with 11 kW is standard; the complete charging process takes over five hours at an appropriate charging point. For DC charging, the usual PSA specification is that the e-Rifter can charge to 80 per cent in 30 minutes at a charging station with 100 kW.

In the press release, Peugeot emphasises that space and load volume are precisely the same as in the combustion engine versions of the Rifter. In the five-seat configuration, that’s at least 775 litres. In the standard length (also called L1), the e-Rifter is 4.40 metres long and has five seats. In the long version L2 (4.75 metres), five seats are standard, with seven seats available as an option. If the seats in row 2 and the passenger seat are folded down, the load volume increases to over 4,000 litres. Compared to its sister models, the e-Rifter has an off-road/outdoor look with black plastic parts but has no separate off-road options. At 1.90 metres tall, the car should still fit into most garages and parking garages.

The new e-Rifter is expected to be available for order from the second half of this year. Peugeot has not yet announced prices; however, it has already been announced that the e-Rifter will be available in four trims (Active Pack, Allure, Allure Pack and GT).

Peugeot has opened the order books for its all-new e-Rifter in the UK. Customers can place orders from now, with the first deliveries expected in November 2021. The Peugeot e-Rifter is available in two trim levels, with prices starting from £30,375, including the current Government Plug-in Car Grant of £2,500.

The other vehicle versions also qualify for the government plug-in car grant, as the five-seater GT variant starts at prices from £32,455, while the option of a long-wheelbase, seven-seater Allure Premium starts with prices from £32,375.

For the release, Peugeot also advertises new regenerative braking modes, with the ‘Moderate’ mode feeling “similar to the feeling in normal internal combustion vehicles when lifting off the throttle”, while an ‘Increased’ mode offers better mileage, although the manufacturer does not specify how much the range difference is between modes.

Peugeot UK has revised pricing for its all-electric e-Rifter. The entry-level Allure Premium model is again eligible for the Plug-in Car Grant. The range now starts from £30,450 OTR after the grant, down from £32,375.

So the e-Rifter Allure Premium in Standard length is now eligible for the £1,500 Plug-in Car Grant (PICG). The price reduction follows from earlier changes to the Rifter line-up, with the range now exclusively sold as full-electric vehicles to meet growing customer demand for electric vehicles, Peugeot says.

The move also follows other manufacturers who reacted to the British Government having adapted both the PiCG and grant for vans in March as reported. Westminster lowered the price cap for eligible electric cars from £50,000 by £15,000 to now £35,000 and will now subside pure electric vehicles with £2,500 instead of £3,000 (2,920 euros instead of 3,505 euros).

The van subsidy programme was also extended in March as reported with more weight classes now being supported.

Peugeot has updated its e-Rifter in the UK with interior changes and new specification levels. Launched in 2021, the Rifter is sold exclusively as a fully electric variant in the UK – the e-Rifter. The updated Peugeot e-Rifter is now available in Allure and GT trim levels. Allure replaces the current Allure Premium specification level, with prices starting from £30,100 after the current Government Plug-in Car Grant. GT models will start from £33,630, representing a £1,060 reduction when compared to the previous price, with no change in specification.

BYD ups sales in January, expands in Aus and NZ