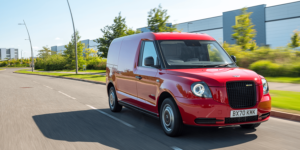 Collectively, the Coalition operates more than 500,000 vehicles and founding members had pledged as early as in 2018 to electrify their fleets. On top of the Climate Pledge, the extra Alliance lobbies the British Government to adopt a 2030 end date to the purchasing of new petrol and diesel cars, a policy that is currently under review as reported.

Three years ago, the British government introduced a ban on the sale of new cars with combustion engines from 2040 and recently issued concrete plans to indeed bring this deadline forward by ten years to 2030. The update from PM Boris Johnson is expected this autumn along with a row of other new clean energy policies aimed at providing a green trigger for the economy in the face of the effects of the coronavirus pandemic.

Royal Mail is the latest (if not late) new joiner and has the largest business fleet in the UK. CEO Stuart Simpson said the delivery service would work with the partners “to champion and enable the widespread implementation of charging infrastructure to make that happen in as many locations as possible across the UK.”

Accelerating the roll-out of charging infrastructure is but one target of the UK Electric Fleets Coalition as set out in a policy paper. As mentioned, the companies and The Climate Group are also calling on the government to fast-forward the sales ban of ICEs to 2030 – sooner than any other calls for revisions of the policy so far – and are joined in the effort by petrochemical companies Shell and BP.

In addition, they also want Westminster to introduce a zero-emission vehicle mandate to require vehicle manufacturers to produce an annually increasing percentage of zero-emission vehicles and to extend grants for electric vehicles and charging points through to at least 2022. That is when the coalition expects EVs to start competing on price with conventional vehicles.

To fulfil the pledges, Openreach reportedly ordered 270 Vivaro-e and nine Corsa-e in August. This was after British Gas had ordered 1,000 Vivaro-e in July.