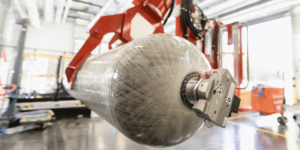 The transaction will be completed as soon as regulatory approvals are obtained in China, the French company said. Faurecia and CLD plan to develop and manufacture hydrogen tanks for the Chinese market, according to the statement. CLD, headquartered in Shenyang, has two plants in Liaoning with a capacity of 30,000 tanks per year and already supplies H2 tanks to Asian vehicle manufacturers.

Faurecia is thus betting on the continued growth of the hydrogen market in China. “By 2030, China will represent a market of at least one million fuel cell vehicles,” says Mathias Miedreich, Executive Vice President of Faurecia Clean Mobility. “Through our complementary technologies and industrial expertise, we will further develop CLD’s leadership.”

Faurecia operates a fuel cell joint venture called Symbio with Michelin and won a major contract from Hyundai last year to supply the hydrogen storage system, including 10,000 tanks, for the 1,600 fuel cell trucks Hyundai plans to bring to the Swiss market.

They see themselves in a unique position to “develop hydrogen storage systems and distribution services as well as fuel cell systems”. These areas (including the Symbio joint venture) would represent 75 per cent of the system’s value chain, Faurecia said.