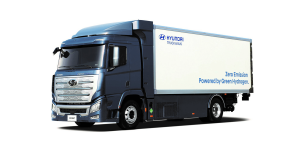 According to an announcement by the company, delivery is to take place from 2021 over a period of four years. “The technology for fuel cell electric vehicles will become increasingly important in the next ten to 15 years, especially for commercial vehicles,” comments Faurecia CEO Patrick Koller on the major order. His company is investing considerable resources in optimizing technology and creating an industry-leading ecosystem.

With this contract award, Faurecia becomes part of a large-scale H2 project: Hyundai plans to bring a total of 1,600 units of a fuel cell truck to the Swiss market by 2025. The first 50 Hyundai H2 XCIENTs are to be delivered to Switzerland this year. The Hyundai H2 XCIENT has been developed in accordance with European truck guidelines. The fuel cell system, which uses two 95-kW stacks connected in parallel, has a total output of 190 kW. Also on board: seven high-pressure hydrogen tanks, which provide a storage capacity of almost 35 kg of the volatile gas. This means that each fuelling process should be able to hold hydrogen for a range of around 400 kilometres.

The mega-project is based on a cooperation between Hyundai and the Swiss company H2 Energy (H2E). In April 2019, both sides signed an agreement to set up a joint venture called Hyundai Hydrogen Mobility. Its aim is to develop the European hydrogen mobility ecosystem with fuel cell trucks – starting in Switzerland. Hydrospider was founded at the beginning of 2019 for the production and storage of green hydrogen and its delivery to filling stations. Alpiq, H2 Energy and Linde are involved in this joint venture.

Faurecia CEO Koller describes the order now placed by Hyundai as “an important step in our efforts to achieve a leading position in fuel cell technology”. He describes the merger of Faurecia’s own fuel cell business with that of Michelin as equally relevant. The merger announced in March was completed almost three months ago. The result is the joint venture “Symbio, A Faurecia Michelin Hydrogen Company”, in which both partners hold equal shares.