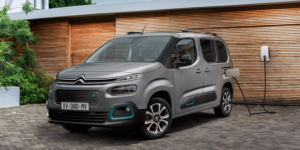 A few weeks after Citroën unveiled the ë-Berlingo panel van, the French company is now presenting the passenger car counterpart of the all-electric van. Simply named ë-Berlingo, the van will be available in two lengths from this autumn and can carry five to seven people.

Under the umbrella of PSA, every van in this class also comes with a high-roof station wagon or vice versa. At Peugeot, the double is called e-Partner and e-Rifter, at Opel/Vauxhall Combo-e Life and Combo-e Cargo. So the launch of the ë-Berlingo was as certain as the Amen in the church. Visually, the van differs only in nuances from the combustion engine model: in addition to the charging port on the left rear side, the ë-Berlingo features blue-coloured details on the bumpers, a side air bump and the ë logo. Like the electric panel van variant, the model is available in M and XL lengths, i.e. in 4.40 and 4.75 metres. The range of 280 kilometres is said to be just above that of the van. However, the vehicle has not yet been homologated. The final consumption figures are therefore not yet available.

The technical data can be summed up quickly because the ë-Berlingo shares the technical package with a number of PSA models already launched on the market. The familiar duo of 50 kWh battery and 100 kW electric motor on the front axle is onboard. The PSA subsidiary states the top speed at 135 kph. The battery system is liquid-cooled, has a heat pump as standard and can charge eleven kW three-phase alternating current (AC) as well as up to 100 kW direct current (DC). According to Citroën, the battery of the ë-Berlingo can be charged to 80 per cent in just under 30 minutes at fast-charging stations and in seven and a half hours (7.4 kW, single-phase) or five hours (11 kW, three-phase) at AC units. The battery is guaranteed for eight years or 160,000 kilometres for 70 per cent of its charge capacity.

In the ë-Berlingo, as in the panel van, the battery is installed under the seats and the load floor, which is intended to preserve the interior volume. The load volume is 775 litres in the M length and 1,050 litres in the XL length when only five seats are fitted instead of the seven possible. Access to the luggage compartment is via a classic tailgate or a separately opening rear window. Passengers enter and exit via one of the two wide sliding doors. Citroën also claims a towing capacity of up to 750 kilograms (braked at 12% test gradient) and a turning circle of 10.8 metres.

As with the panel van, the ë-Berlingo also comes with 18 driver assistance systems, including a lane departure warning system, a blind spot assistant, trailer stability control, a head-up display and an Active Safety Brake. A customisable 10-inch instrument cluster is available as an option or is fitted as standard from the Feel Pack trim level. Also on board are modern connectivity technologies. Citroën mentions the Connect Nav navigation system as well as the integration of Apple CarPlay and Android Auto.

The new ë-Berlingo is scheduled to go on sale in autumn and will complement the electric range, consisting of the ë-C4, the ë-Spacetourer and the commercial vehicle trio ë-Berlingo panel van, ë-Jumpy and ë-Jumper. “Thanks to sufficient range, the E version of the Berlingo also stands for versatility without compromise, so that our customers can enjoy their activities in all their diversity,” says Laurence Hansen, Citroën Director Product and Strategy.

Citroën has launched the ë-Berlingo in the UK. Prices start from £29,575 after the current Plug-in Car Grant is applied.  The range of up to 174 miles (WLTP) applies to both available versions ‘‘M’ (Medium) and ‘XL’ body lengths, with five and seven seats, respectively. Both are delivered with the 7.4 kW single-phase charger as standard.

Seat announces Cupra Born to release in second half of 2021