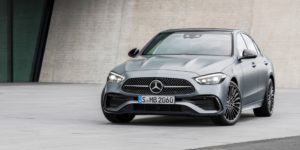 Mercedes has presented the new generation of the C-Class. These are only mild hybrids, and a plug-in hybrid is to follow in a few months. This promises a high electric range on paper and an unusually high charging power for plug-in hybrids.

Daimler is still being sparse with the data on the plug-in hybrid at the premiere of the new C-Class. The PHEV version is to follow “soon after the launch”. The electric drive power is given as 95 kW, the combustion engine is said to be the two-litre variant of the M254 petrol engine. Without the plug-in hybrid, this engine is offered as the C300 and has an output of 190 kW – plus 15 kW in boost from the 48-volt hybrid.

With a maximum torque of 440 Newton metres, Daimler is hoping that the plug-in hybrid should be able to drive purely electrically without using the combustion engine in many cases and on many days. With the electric motor alone, the C-Class is supposed to be able to drive up to 140 km/h.

The now 25.4 kWh battery has its own cooling system, so the temperature of the cells can be regulated independently of the air conditioning system via its own thermal management. The own cooling should also enable continuous operation in hot and cold temperatures as well as fast charging. The charging power of the optional DC charger is given as 55 kW. A completely empty battery should be able to be charged in around 30 minutes.

In Germany, a three-phase 11 kW charger for AC charging will be on board. This equipment is said to be ‘market-dependent – in some countries, there is probably only a one- or two-phase onboard charger.

Because of the increased range and the hoped-for higher electric driving shares, Mercedes says the driving experience should become “significantly more electric”. The partially electric car should have a recuperation power of up to 100 kW, which means that purely electric deceleration including energy recovery will also be possible with the plug-in hybrid – also referred to as “one-pedal driving”. In addition, the strength of the recuperation is to be selectable in three stages via steering wheel paddles – except in Sport mode.

The operating strategy is supposed to communicate with the sensors of assistance systems and thus enable the most efficient drive possible, for example, inner-city journeys are to be prioritised electrically. An ‘electric’ mode and a ‘battery hold’ function will also allow the driver to select the desired drive mode.

Both the saloon and the estate will be available to order in Germany from 30 March and will be delivered in summer 2021. The German carmaker has not yet revealed when the plug-in hybrids will follow. Later on, Mercedes will launch a diesel PHEV in the C-Class.

Mitsubishi announces US pricing for the 2021 Outlander PHEV