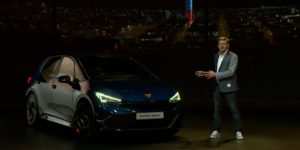 As part of a strategy presentation, the Seat brand Cupra has now shown the production version of the electric model based on the Volkswagen Group platform MEB, which was first presented in 2019 as el-Born. The car is scheduled to go into production in Zwickau in the second half of 2021.

The model designation has been changed slightly: The production model will be called Cupra Born, so the preceding “el-” has been dropped. The model was introduced in 2019 as the Seat el-Born, but was later moved internally to the Cupra performance brand and slightly adapted in design.

The Cupra Born is considered the Spanish counterpart to the VW ID.3, the similarity refers not only to the MEB technology, but also some points of the design. Since this was a strategy presentation and not a product presentation, Cupra was rather cagey about the technical data. For the time being, the Born will probably be positioned as a counterpart to the ID:3 Pro S – i.e. with the 150 kW engine, the 77 kWh battery, a charging power of up to 125 kW and a WLTP range of 513 kilometres.

Until now, the brand has mainly offered high-performance offshoots of petrol cars and PHEVs from Seat. The first standalone Cupra model, the Formentor, is also offered as an OPHEV and petrol engine. The Born is set to become the first all-electric model and kick-start Cupra’s transformation, according to Seat and Cupra CEO Wayne Griffiths. “This vehicle will help reduce global CO2 emissions and meet European targets,” Griffiths said. “With this car, we want to contribute to the electrification of Spain and the world through its emotional sportiness.”

With the MEB model, Seat or Cupra is also taking over Volkswagen’s agency model in sales. In addition, the Born is also to be offered on a subscription basis. The brand expects increased visibility from the opening of so-called “City Garage Stores”, which are to be opened in Mexico City, Barcelona, Hamburg and Munich, among other cities.

It was also confirmed that the brand is working on a series version of the purely electric Cupra Tavascan concept car. The Tavascan, which is very dynamically designed, at least as a study, is somewhat larger than the Born and is likely to be based more on the VW ID.4 in terms of size and drive.

But there are also plans for electric cars at Seat itself in the future. According to a recent report by Reuters, Seat is considering the production of an all-electric small car at its Martorell plant near Barcelona and is pushing the Spanish government for battery production near the plant. Last week it was reported that consideration is being given to converting Nissan’s car plant in Barcelona, which is due to close, into a battery production facility for electric cars that could also benefit Seat.

This is not the first time there has been speculation about such plans for Seat’s main plant. Already at the end of November 2020, the German newspaper Handelsblatt wrote that VW’s electric small car is to be built in cooperation with JAC in China. In addition to the model presumably named VW ID.2, a sister model for Cupra could also be built at JAC, it said at the time. According to the report at the time, Martorell was the favourite for the European production of the duo planned starting from 2025. The Spanish government was also making intensive efforts for the project.