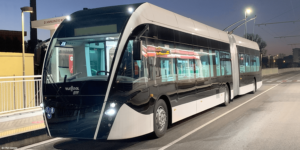 Belgian bus manufacturer Van Hool will deliver six 18-metre electric buses to the transport authority of the Italian city of Pescara from mid-2022, while three more could follow. The buses also feature technology from a German supplier.

The trolley bus system is to connect the Italian Adriatic cities of Pescara and Montesilvano. In order for the six vehicles to be able to drive through sections without overhead lines, Van Hool is using IMC technology from Kiepe Electric.

The ‘In-Motion-Charging’ technology made by the Düsseldorf-based company enables the charging of the additional battery installed in the bus via the overhead line during the journey. As a member of the consortium around Van Hool, Kiepe Electric supplies the entire high-voltage system with traction equipment for the two-axle drive, on-board converters, battery chargers as well as the batteries and IMC current collectors including diagnostic systems.

Kiepe Electric’s parent company Knorr Bremse said that the new TUA (Trasporto Unico Abruzzese) trolleybus line is currently eight kilometres long. As there are already plans to extend the line to the Pescara Court of Justice, battery-powered driving without an overhead line has been included in the vehicle’s capabilities.

Andreas Ketterl, managing director of Kiepe Electric, said that the IMC system would contribute to “environmentally friendly local transport in the charming coastal region of Pescara”. “TUA is taking a pioneering step in Pescara’s public transport system with the introduction of the new IMC system, which is already part of everyday life in numerous Italian cities,” Ketterl said.

In 2019, Kiepe supplied IMC systems to the Polish manufacturer Solaris, which had won orders from Milan and Modena. In the future, 18-metre buses on the Rapid Coast Transport (TRC) express line are also to use IMC technology between the Adriatic cities of Rimini and Riccione.