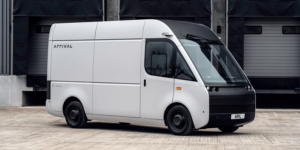 The British electric vehicle developer Arrival has shown the current version of the delivery vehicle, which is to go into test use with customers from the summer of this year. Technical data was also announced, including information on the battery.

Arrival will launch the battery-electric van in lengths from 5.1 to 6.5 metres. That makes for a payload of 1,975 kg and a cargo volume of 2.4 cubic metres per metre of cargo space length. The modular battery pack offers capacities between 44 kWh and 133 kWh.

Arrival has not provided details on the electric motor, the charging system and the range so far. They say they designed the van so that the lightweight aluminium frame and composite components not only reduce weight to increase range, but also minimise downtime and costs with repairs needed less frequently.

As is so often the case, some defining elements of the early prototypes and renderings have been lost on the way to the near-production version. The images now published by Arrival show a van with a conventional-looking, sloping windscreen that also only starts at a height common to Sprinter-type vans. The earlier models still had a near-vertical windscreen, which protruded far down and, in combination with the large side windows, was supposed to offer good visibility. Possibly in view of aerodynamics and production, Arrival has apparently chosen a different concept in the meantime.

Arrival states that the van is being “co-developed with drivers and operators” to “maximise functionality for real-world use”. Here, the new concept for the driver’s cabin has probably proved better – whether it was cost, aerodynamics or practical features (in the early vehicles, it seemed that the side windows could not be opened, for example), Arrival does not reveal in the announcement.

The electric transporter is to be offered at a purchase price comparable to that of combustion engine vehicles, and Arrival also says that a “new standard” for commercial vehicles is to be achieved in terms of the total cost of ownership (TCO). The start of series production is planned for the 3rd quarter of 2022.

The first examples will then probably go to UPS. The US logistics company has already ordered 10,000 vehicles from Arrival. “We believe that the rapid growth of e-commerce has led to a much higher demand for light commercial transport in cities, increasing both congestion and air pollution,” says Avinash Ruguboor, Arrival’s president and chief strategy officer. “We are in the midst of an important market transition as more and more fleet managers adopt cleaner and more sustainable methods, and cities adopt stricter air quality measures. We are looking to accelerate that transition with a best-in-class solution that has clear benefits, at a purchase price and TCO that makes the transition the best possible commercial decision too.”

Shortly after the van in the summer, Arrival’s first electric bus will then go into test use from the autumn with operator First Bus in the UK.