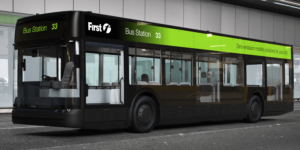 Arrival announced that it will begin trials of its zero-emission bus with transport operator First Bus. The trials, which will see Arrival buses navigating existing First Bus routes in the UK, will begin this autumn.

So far, First Bus has not revealed exactly which routes the Arrival bus will be operated in this pilot. Arrival has not revealed a lot of public information about its zero-emission bus. Coach and Buss Week writes that the Arrival Bus used in the pilot features a single front door with a passenger seating capacity of 36 across the entire flat floor. The bus is apparently equipped with up to 310.8 kWh of energy storage capacity with the option of both an AC and DC charge. Arrival says that the bus should be up to 40% lighter than other battery-electric buses in the market today.

First Bus is based in Aberdeen, Scotland and is one of the largest fleet operators in the UK. The company recently announced their commitment to purchase no diesel buses after 2022 and to operate a fully zero- emission fleet by 2035. First Bus is also running separate trials of electric buses made by the rival manufacturers BYD ADL, Optare and Yutong, as well as a trial of hydrogen fuel cell buses in Aberdeen.

Arrival is also moving quickly. Late last year, Arrival announced that deals were signed for the company to go public. This has been made possible via a merger with the CIIG Merger Corporation. In October just past, Arrival announced it would be building its first micro-factory in the USA in York County in the state of South Carolina and scheduled to produce electric buses from the fourth quarter of 2021. The new micro-factory will build a battery-electric bus with a subway-like interior.

Arrival moved into a plant in Bicester in March last year, where, among other things, the electric delivery vans are built from the large UPS order of at least 10,000 vehicles. Earlier this year, Hyundai and Kia invested 100 million euros in the British electric vehicle developer.