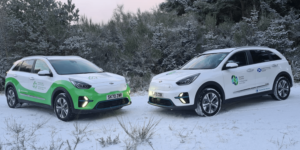 The Scottish Government’s forestry agencies have delivered the latest batch of electric vehicles as part of their electrification efforts. Eight Kia Niro electric cars and three Nissan eNV200 light commercial vans have arrived to serve across the Scottish woodlands.

Purchase of the eleven electric vehicles was made possible through Transport Scotland’s Switched on Fleets & Infrastructure Funding. They considers this “a step towards Forestry and Land Scotland (FLS) and Scottish Forestry continuing their journeys towards becoming net-zero organisations by 2045 or sooner.”

“Shifting our fleet to electric vehicles will help reduce our overall emissions as an organisation, and with an ever-increasing choice of electric vehicles coming to market, we’re able to source the right vehicles that we need,” he added.

The Switched on Fleet Funding from Transport Scotland granted £84,000 to FLS.

Scottish Forestry’s electric vehicles will be used by Woodland Officers who need to visit woodland sites for inspections and as part of their everyday duties in promoting woodland creation projects.

Dave Signorini, Chief Executive of Scottish Forestry, added: “We all have a corporate duty to reduce our emissions as Scotland strives to be a net-zero nation by 2045. Not only are we working hard to deliver increased carbon sequestration in woodlands, but we are also taking more direct action in our own business.”

FLS’ new vehicles will be used from its offices in Selkirk, Dumfries, Newton Stewart, West Calder, Inverness, Fochabers and Durris.

Both agencies are also working together in expanding their charging infrastructure across Scotland. Electric vehicle charging points are already installed at 12 FLS locations and a further three SF locations.