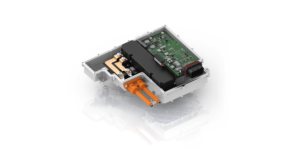 Automotive supplier ZF is going into series production with 800-volt technology for electric vehicles and is preparing corresponding series start-ups in China and Europe. The ZF components are to be launched on the market this year “in several vehicles in upscale segments”.

To this end, ZF says it is developing and producing 800-volt components for the electric driveline. According to the company’s statement, the central power electronics use silicon carbide as a semiconductor. ZF has already tested the technology in Formula E, where, however, a 900-volt system is used. The supplier from Lake Constance has been working with India’s Mahindra racing team since 2019, and ZF was previously a powertrain partner of Venturi.

“We are currently working on the start of production for several premium 800-volt projects,” says Bert Hellwig, who is responsible for electric drive system development at ZF. “We supply a Chinese OEM with the complete electric driveline, including power electronics, for several models. For a European sports car manufacturer, ZF provides power electronics for a high-voltage application.” Further series start-ups are already on the horizon, he said.

Car manufacturers rely on 800-volt technology to design their wiring system architecture for higher (charging) power. If higher currents flow (primarily for fast charging, but also for more powerful drives), thicker cables must be used or better cooling must be provided as more heat is generated. This increases vehicle weight and complexity. So far, the Porsche Taycan is the only series-production model to use an 800-volt system, but this year volume models with this system voltage are to be launched with the Hyundai Ioniq 5 and Kia EV6.

As Hellwig indicates, however, ZF expects models like the Ioniq 5 (starting at £45,000 in the UK) to remain the exception rather than the rule, with vehicles like the Taycan or its sister model, the Audi e-tron GT, likely to become the norm. “It is becoming apparent that the 800-volt architecture will establish itself in future premium vehicles or sporty electric vehicles, whereas the 400-volt architecture will remain the standard in the volume market,” says the drive expert.

An important feature of ZF’s 800-volt components is the use of silicon carbide. Up to now, mainly silicon transistors have been used. Silicon carbide, or SiC for short, reduces internal switching losses. Because the power electronics have a very high energy throughput during electric driving and recuperation, the efficiency of the entire electric powertrain increases – and with it the range.

However, ZF is not alone in using SiC for 800-volt components: The supplier Delphi Technologies (now acquired by BorgWarner) had already presented an inverter with this voltage in 2019, which uses SiC semiconductors from the manufacturer Cree.

Skoda Enyaq iV on sale in the UK