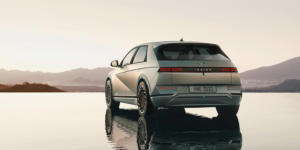 Hyundai has reported a high level of interest in the 800-volt electric vehicle less than a week after the Ioniq 5 world premiere. Customers in Europe have submitted 236,000 expressions of interest for the special edition ‘Project 45’. Production is limited to 3,000 units, so it was sold out within a few hours.

The planned production of ‘Project 45’ – full details of which can be found in our report on the premiere of the Ioniq 5 – was “almost three times oversubscribed” within 24 hours, Hyundai said. In the release, the Korean company states that the Ioniq 5 “quickly generated a very high level of website traffic and social media engagement with consumers in Europe – more than Hyundai had ever recorded for such an event.” The feedback even surpassed the 2020 result for the new-generation internal combustion Tucson, they said.

However, the virtual launch and reservation startup has arguably caused problems. Originally, the ‘Project 45’ special model was available for reservation from the premiere day, i.e. 23 February. Then Hyundai delayed the date for the activation of the portal to 25 February.

As the electric car portal Nextmove reported, there were technical problems repeatedly even on this date. Besides, it was probably not yet possible to reserve a specific car. It is probably a multi-stage selection process: at the end of the registration, interested parties only received a message that they were among the first 3,000 interested parties; Hyundai would contact them in the coming days.

Hyundai itself is naturally pleased with the feedback on the new electric car. The “exceptionally high level of interest” in the Ioniq 5 underscores Hyundai’s strength in zero-emission mobility, says Andreas-Christoph Hofmann, Vice President Marketing & Product at Hyundai Motor Europe. “With its ultra-fast charging, long-range and customisable interior space, the IONIQ 5 is a game-changer that sets the benchmark in its class – and these outstanding characteristics have immediately proved to be attractive to significant numbers of European customers.”

The Ioniq 5 is known to be the first model built on Hyundai-Kia’s new E-GMP electric platform. This will make the Ioniq 5 the first volume model with 800-volt batteries. The first electric Kia based on E-GMP is to follow later this year. Hyundai has expanded the model name Ioniq into its own sub-brand for the E-GMP platform – the electric CUV (crossover utility vehicle) Ioniq 5 is to be followed by an electric sedan called Ioniq 6 and an electric SUV (Ioniq 7).