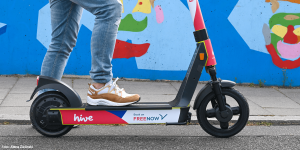 BMW and Daimler’s mobility provider Free Now appears to have discontinued its e-scooter brand Hive without much ado at the end of last year. Free Now was to save high investments in hardware and logistics due when operating a scooter fleet.

The timing appears curious in retrospect – the decision to discontinue Hive was taken just a month after Free Now launched Hamburg. They were to “gather extensive learnings in Hamburg over several months and then look at other German cities for a market launch,” the company said at the time.

Talking to Handelsblatt today, a Free Now spokeswoman said, “We are focusing on an asset-light platform,” to explain the new strategy. Like rivals with no roots in automotive, this means Free Now will concentrate on MaaS, not vehicle, i.e. facilitate bookings of rental cars, cabs, and scooters – from third parties. The company only announced a deal this week. Berlin-based Tier Mobility will integrate its kick-scoters and e-mopeds into the Free Now app.

Free Now will make Tier’s two-wheelers available in eight German cities from April onwards and said France was next on the app. “Further cities across Europe will be launched throughout the summer,” the partners added. When announcing the deal, Free Now CEO Marc Berg considered the partnership “a great demonstration of how committed Free Now is to be a multi mobility platform.”

New deals aside, the decision is also an attempt to save cost. The ride-sharing service was hit hard by the pandemic, Handelsblatt find. They quote activities of over 46 million users were down 44 per cent in 2020 compared to 2019. Free Now also decided a staff reduction in the “lower triple digits” – the company employs 2,100 people.

For 2020, the company expects a “slightly improved, albeit once again clearly negative annual result”. Discontinuing Hive has cost them ten million euros in write-offs. In the annual statement, Free Now expects to feel the effects of the Covid-crisis until 2022 when it comes to growth and sales.

Free Now had been at the core of Daimler’s and BMW’s joint mobility offering that they had launched with some birthing pains in early 2019 when they bundled their mobility services in five enterprises. ReachNow (multimodal transport), ChargeNow (charging), FreeNow (ride-hailing), ParkNow (parking), and ShareNow (car-sharing, DriveNow and Car2go), some of which is under their joint subsidiary Moovel, which has ties to Tier going back two years. Hive had been carried over from Daimler’s old MyTaxi service in 2018.

The services were launched with high hopes and endowed with one billion euros. In 2019, however, losses at Free Now totalled around 379 million euros, and the carmakers are increasingly losing their appetite for continuing to support the loss-making units, writes Handelsblatt. Indeed, there is an offer on the table from Sweden’s EasyPark to take over Park Now. The partners had also begun last October to sell off parts of their services as reported. This may also have played a part in deciding to discontinue Hive already at the time.

While an acquisition through Uber is off the table, Free Now also looks for “new financing models,” reports Handelsblatt. They quote a seasoned Daimler man saying, “Free Now is our only real trump card in mobility services.” Yet to stay on top of the MaaS foodchain in Europe, they would have to continue to invest a lot of money in the coming years, the manager told the paper. So in the long term, BMW and Daimler are explicitly looking for new investors.