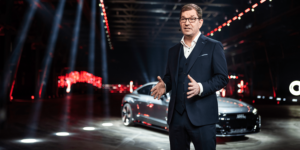 The schedule in China with the six electric vehicle models from Changchun is ambitious, in that production is not scheduled to start there until 2024. Audi would therefore have to establish six production lines within a few months. The Changchun plant is being built by Audi with joint venture partner FAW (Audi holds a majority stake in the electric joint venture) and construction is due to start in May. “This is the first major wave of the electric offensive that we will push in China,” says Audi CEO Markus Duesmann.

From 2024, electric cars based on the “Premium Platform Electric” (PPE) developed jointly with Porsche are to be built there. It is not yet known which model will be built there first. Six models by 2025 will probably be a mixture of sedans and SUVs.

Audi’s first PPE electric cars are likely to be built in Germany even before Changchun. As the carmaker announced at its digitally hosted annual press conference, the main plant in Ingolstadt is already being converted for the production of PPE-based electric cars. Duesmann stated at the JPK that one of the three assembly lines in Ingolstadt will be converted for this purpose. “Only EV models will then be built on one line,” Duesmann said. The conversion has already begun, he said, and it involves the old A3 body shop.

The first electric Audi from Ingolstadt will be the Q6 e-tron, Duesmann also confirmed. Production is scheduled to start next year. The engines will be supplied by the Hungarian engine plant in Győr. However, the PPE platform is to be used for the first time at Porsche: in the new electric Macan, which is being built in Leipzig. The e-Macan and the Q6 e-tron are to share the technology. Audi has not yet confirmed what the premiere of the Q6 e-tron (very likely with 800-volt technology) will mean for the e-tron quattro built in Brussels in the same segment.

“Shortly after the Q6 e-tron”, production of another electric car is to start in Ingolstadt. Whether this will still take place in 2022 or be moved up to 2023 is not specified. The model in question is said to be the internally designated ‘E6’, an electric sedan in the format of an A6 – but based on the PPE and thus an independent electric platform.

Duesmann had already confirmed at the beginning of the week that Audi would not be developing a new generation of combustion engines. As the Handelsblatt now reports, Audi wants to decide by the summer how long the company will continue to build cars with petrol and diesel engines. Whether there will be a fixed exit date is open. The strategy is currently being revised, said Audi CEO Markus Duesmann.