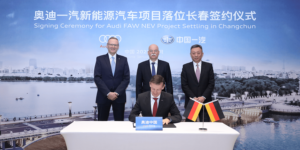 The electric car joint venture between Audi and FAW in China, which was officially announced in October 2020, is becoming more concrete: The future company will be 60 per cent owned by Audi AG and Volkswagen Group China and 40 per cent by FAW and will be based in Changchun in north-eastern China.

From 2024, the new joint venture will concentrate on the local production of purely electric Audi models based on the “Premium Platform Electric” (PPE) developed jointly with Porsche. Like the existing FAW-Volkswagen joint venture, it will be based in Changchun. For Audi, this is the first joint venture with a majority shareholding in China. However, the joint venture still has to be officially founded. This is expected to take place during the first quarter of 2021 following approval by all parties involved and the Chinese regulatory authorities.

“With the new Audi-FAW company in Changchun, we are further expanding our presence on the Chinese market and strengthening our position as a manufacturer of fully electric premium vehicles through local production,” expressed Audi CEO Markus Duesmann, who is also responsible for the China business. “In doing so, we are continuing the Audi success story in China and actively helping to shape the transformation of the Chinese automotive industry as it moves toward sustainable mobility.” Local production of the first PPE BEVs built jointly with FAW is scheduled to start by 2024. Audi is not disclosing which model it will be. At the moment, it is not even officially known which model Audi will build first in Europe on the PPE basis – at Porsche it will be the electric Macan from 2022.


Audi and FAW signed a memorandum of understanding concerning the planned electric car joint venture in October last year. This was signed during the German-Chinese Automotive Conference, which was taking place in Changchun at the time. The first rumours about the joint venture had already surfaced at the end of September.

Audi says it plans to offer or localise further fully electric models from the e-tron family in China in the coming years. By 2025, Audi aims to achieve around one-third of its sales in China with electrified cars. Currently, Audi and FAW offer the Q2L e-tron as a BEV and the A6L TFSI e as a PHEV. Also, the previously imported e-tron quattro has been built in Changchun since September.

Audi also produces at four locations in China as part of the FAW-Volkswagen joint venture: in addition to Changchun, in Foshan, Tianjin and Qingdao. Also, there are SAIC-Audi plants.

The locally produced PPE-based Audi battery-electric vehicles are to be sold by FAW-Audi Sales Co. Ltd, the joint venture’s new sales arm, just like the Audi models currently already produced FAW-Volkswagen and imported vehicles of the brand locally. According to Gasgoo, the company’s name appeared in a list of newly registered companies in China in December.

Update 1 February 2020: Audi and FAW have announced the management team for their PPE joint venture in Changchun. Starting on 1 May, Helmut Stettner will become the CEO of the Audi-FAW company. He previously managed Audi’s Neckarsulm site in Germany for five years. He already took on responsibility for establishing the new company in China on an acting basis in August 2020 on top of his duties in Neckarsulm. Audi points to Stettner having extensive experience in China as he was Site and Production Manager at the joint venture FAW-Volkswagen in Changchun from 2011 to 2015.

Audi CEO Markus Duesmanncommented that they were taking “a further step in the electrification strategy in China,” and added that the team was “extremely well-prepared”.

The other positions on the Board of Management will each be filled by two Audi and two FAW managers.

With reporting by Cora Werwitzke and Nora Manthey.