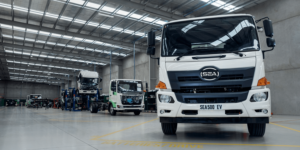 The Melbourne based company SEA Electric has launched volume commercial production of electric trucks. Two SEA Electric-badged vehicles, the SEA 300 and SEA 500, based on the Hino 500 Series and Hino 300 Series models, are now available for purchase in Australia.

Being the first company to offer electric trucks in Australia will likely mean that the company will have to deal with the early-adoption difficulties such as limited charging infrastructure, but also marks a new page turned for Australia. “SEA Electric is privileged to be able to bring this Australian first to the marketplace,” said Glen Walker, SEA Electric Regional Director for Oceania. “These trucks truly meet a need in the marketplace, and prior to this launch, we have received pre-orders for 46 vehicles from some of Australia’s biggest companies and councils.”

The trucks themselves are powered by SEA Electric’s SEA-Drive Power-System, which is available in various performance and range packages to suit applications from 4.5 tonne car licence vehicles through to 22.5 tonne 3 axle trucks. Charging of the SEA-Drive Power-System can be done via 415V 3-phase power via the truck’s standard on-board charging equipment. DC charging is also optionally available on the vehicles, though.

The company is also keeping an eye on future-proofing their technology, especially as they note that CO2 emissions from energy generation are still the number one polluter in Australia: “Mass uptake of electric trucks in urban Australia has the potential to save up to millions of tonnes of CO2 each year, and provide up to 40,000 MWh of mobile battery storage, which is a potential future revenue stream.”