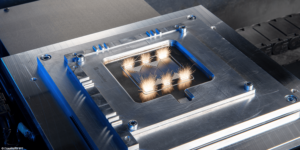 Fuel cell production for hydrogen-powered vehicles has so far been complex and too slow. A Fraunhofer team aims to change that and is working on a continuous production line. The pledge: the line shall process fuel cell components in cycles lasting just seconds.

Fraunhofer reasons that fuel cell production is way too slow to get near the targets Europe has set. For example, the European Commission’s ‘Hydrogen Strategy’ aims to expand electrolysis output by a further 40 gigawatt. Enough for a hydrogen future but “as yet, Europe has no mass production facility that could cover this demand,” says Fraunhofer.

Cue in the team around Dr Christoph Baum, Managing Director of the Fraunhofer Institute for Production Technology IPT in Aachen. “We need non-stop production lines that can drop and process components in cycles lasting just seconds,” says Baum, against a backdrop of an industry that mostly sees various producers make various components separately. Fraunhofer calls these “machine islands” on which the different steps prior to fuel cell assembly are performed. It is a complex system “where parts have to be picked up, placed and buffered multiple times – that’s a time-consuming business,” Baum explains. Fraunhofer’s solution: developing a non-stop pilot line in which fuel cell components are made and assembled into the finished product in one place.

At the heart of the project is the fuel cell stack or the hundreds of bipolar plates the stack comprises. The bipolar plates are pulled through an intricate system of millimetre-narrow channels; the hydrogen is fed in at one end, and the water produced by the chemical reaction in the stack being fed out at the other. Producing these plates is a challenge as they resemble a film more than a plate and need to be handled with extreme caution and in multiple steps – all these are now to be combined.

“We are predicting that hundreds of thousands of bipolar plates will be needed for the hydrogen economy of the future,” says Christoph Baum. “For this reason, we are striving to achieve a throughput of at least one bipolar plate per second across all plants.” Because some process steps are faster than others, the challenge is to optimize the flow as a whole, according to Fraunhofer. While the blank pressing process, which the team calls deep drawing, only takes about a second, adding a protective layer takes much longer.

The team at Fraunhofer IPT has already developed a production line on which special pick-and-place handling devices hand down all components and the bipolar plates in such a way as to create a fluent process. The institute will present the pilot line during the Hannover Messe Digital Edition from 12 to 16 April. Fraunhofer IPT also teamed up with Fraunhofer Institute for Material and Beam Technology IWS and the Fraunhofer Institute for Machine Tools and Forming Technology IWU to lay out their “action plan” and initial research results for the cost-effective, automated mass production of fuel cells.

On the said note of automation, the CoBIP project (continuous roll-to-roll production of bipolar plates for fuel cells) drives the automation of the pilot line together with the Fraunhofer Institute for Laser Technology ILT, the Jülich Research Center and several industrial partners. The researchers are developing a plant for processing the bipolar plates in a film strip – “off the roll,” the team calls it. The film strip passes through the machine and all process steps. Only at the very end are the bipolar plates cut off the strip and isolated. This continuous process from the roll to the finished item will save several handling steps, according to Fraunhofer. The institute further claims that the plant is designed to be so flexible that industrial partners can exchange and test individual production modules at will.

“It’s true that in Europe, we have a good deal of system expertise for manufacturing high-grade fuel cells. But we lack the facilities to produce fuel cells on an industrial scale at competitive prices — production lines like we already see at Hyundai or Toyota,” Christoph Baum sums up. Fraunhofer adds that the hurdle of industrial production scaling should not be underestimated when it comes to fuel cells. Similar to batteries, transferring systems from the laboratory to mass production is a complex matter.