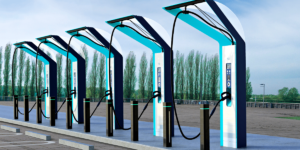 The move is actually a restructuring among existing shareholders. Toyota, Nissan, Honda, Mitsubishi and the Development Bank of Japan, together with energy companies Tepco and Chubu, had established NCS in May 2014 to build a charging network service based on CHAdeMO. Following the associated restructuring and the previous shareholders, they are now also participating in e-Mobility Power and have subscribed to shares worth 15 billion yen (around 115 million euros).

e-Mobility Power will continue to bundle almost all areas relating to the charging of electric vehicles in Japan. In addition to the construction, maintenance and operation of charging stations and related electrical infrastructure, the company also has extensive expertise in developing and maintaining the CHAdeMO fast-charging standard – the Asian equivalent of CCS.

The charging network now acquired by NCS consists of around 21,700 stations in Japan, and e-Mobility Power plans to expand and improve the coverage.