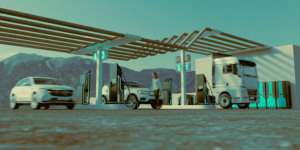 Ekoenergetyka is working on a new series of charging stations for electric commercial vehicles that offer power outputs between 750 kW and 1.5 MW. 22 of these new ‘Ultrachargers’ from the Polish charging infrastructure specialist are to be introduced initially at test locations in Germany and Poland by the end of 2023.

According to the manufacturer, the hubs with the new stations will be installed near motorways and in several urban conurbations, where they will serve “commercial vehicles and municipal services, among others”. So far, the Poles have mainly been active in the charging infrastructure market for cars and buses. With the new “Ultrachargers”, Ekoenergetyka is now addressing light to heavy transport vehicles.

The details of the announcement are quite impressive: thanks to high charging capacities, heavy trucks are supposed to be able to recharge electricity for 100 kilometres in the shortest possible time: “The time for charging a vehicle at the station with an initial capacity of 750 kW will take only 1 minute, or 7 minutes for the assumed electricity consumption of 20 kWh/100 km and 90 kWh/100 km.” Ergo, light trucks needed only four minutes of charging time to charge for 400 kilometres. For heavy trucks, the charging time for the same distance would be less than half an hour – “the duration of the obligatory break for drivers”, as Ekoenergetyka writes.

The development phase at the company’s Centre for New Technologies in Electric Transport is still underway. The work is mainly on new technologies in the fields of power electronics, mechanical structures and equipment optimisation. According to the company, the new project will benefit from the experience gained in several large-scale projects. Ekoenergetyka’s customers include the Parisian public transport operator RATP, the Berlin BVG, the Munich public transport company and the MZA transport company in Warsaw.