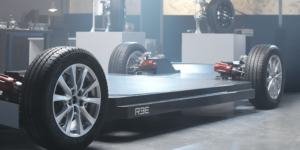 The Israeli start-up Ree Automotive wants to develop and build light commercial vehicles (LCVs) together with the supplier and contract manufacturer Magna – based on Ree’s technology. A corresponding strategic cooperation agreement has now been signed.

The e-cars are to be based on Ree’s space-saving platform and offered under the “Powered by Ree” brand to mobility service providers and new carmakers who lack the time and know-how to develop the technology. Size, body, battery capacity and other specifications are to be almost freely selectable, according to the promise. Ree does not mention key data for minimum or maximum values in the announcement.

The technology called ‘Ree Corner’ is basically a platform in which all critical vehicle components are installed between the chassis and the wheel in the corners of the vehicle. These four compact individual modules – consisting of suspension and drivetrain – ensures a flat interior floor, even between the axles. This is said to allow “unprecedented space” for passengers, cargo and batteries.

For this, Ree relies on wheel hub motors, which have not yet become established in electromobility. Their focus lies on the unsprung masses and ride comfort. Since each of the four modules is identical, the vehicles not only have all-wheel drive, but also all-wheel steering.

With its platform, Ree wants to be able to cover different applications. The smallest version (called P1) can weigh up to 1.8 tonnes and is intended for inner-city delivery vehicles for the last mile. For the variants P2, P4, P6 and P7, the number corresponds to the respective maximum weight in tonnes. P4 is intended to enable an LCV, electric shuttle or SUV, P7 with a total weight of seven tonnes a medium-duty delivery truck.

The collaboration with Magna will still bring together the start-up’s ‘Ree Corner’ technology and Magna’s integration expertise and manufacturing capabilities, according to the release. With MEVs (Modular Electric Vehicles) on this platform, commercial customers will be able to “customise vehicles based on their specifications and branding while reducing time-to-market”. The cooperation with Magna did not come about by chance: when Ree went public, Magna bought into the startup.

The idea of a skateboard platform for electric cars and electric commercial vehicles is not new, but such concepts with wheel hub motors or wheel-mounted electric motors have not yet made it into series production. These concepts have also relied on interchangeable “attachments” for the skateboard platform, for example, the Rinspeed Snap (with ZF) or the Mercedes Vision Urbanetic. So far, Ree only showed pictures of its platform, but not yet what possible commercial vehicles based on it might look like.

Magna has been devoting itself increasingly to electromobility for years. The company not only acts as a contract manufacturer for the Jaguar I-Pace, but will also build the Fisker Ocean in Europe and contributes its own EV platform to this. This year Magna has already introduced its own PHEV and BEV powertrain for passenger cars and an electric drive module for pickups and light commercial vehicles. Magna’s LCV drive, however, is an axle drive.