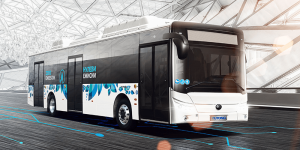 The Welsh port city of Newport is increasing its electric bus fleet from 16 to 32 vehicles. The operator Newport Transport has ordered 16 more electric buses from the Chinese manufacturer Yutong, which are to be delivered by the end of this year. The 16 existing electric buses are also from Yutong.

Newport Transport placed the new order with Pelican Bus & Coach, the importer and distributor of Yutong buses based near Leeds. The new vehicles are expected to be delivered in December 2021, when they will join those already operating in the city since October 2020.

The transit authority has ordered five Yutong E12s and eleven E10s, which, as the name suggests, are respectively twelve and ten metres long. The Yutong buses already commuting in Newport are 15 E12 vehicles and one E10 bus. With the arrival of the second batch of zero-emission buses, Newport Transportation will have converted a third of its fleet to electric propulsion and, according to its own figures, will be able to make 43 per cent of its daily journeys emission-free.

The UK Department for Transport is supporting the purchase with 2.8 million pounds (about 3.2 million euros). Scott Pearson, managing director of Newport Transport, explains that this financial support came earlier than expected. “This earlier than expected financial support from the DfT enables us to deliver at pace on our vision of a fleet with zero emissions at the tailpipe. This new investment will bring Newport Transport’s investment in electric buses and the related infrastructure to £15 million over the financial years 20/21 and 21/22.”

Eloop to add 200 Tesla cars to share in Vienna