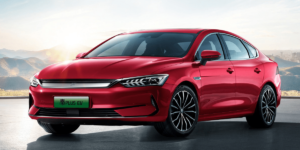 BYD announces to equip all future pure electric models with its ‘Blade Battery’. The first new electric models to have the Blade batteries on board for the Chinese market are the Qin PLUS EV, the Song PLUS EV and the 2021 versions of the Tang EV and the e2.

All four have BYD’s new battery technology on board as standard. The manufacturer first presented the ‘Blade Battery’ roughly a year ago and recently in detail. It is supposed to score above all with longevity and increased safety. As the first vehicle, the BYD Han has already had the new battery technology since mid-2020. “Since its market launch in July 2020, more than 10,000 units have been sold every month,” BYD informs.

So now a quartet of electric cars will follow in China, consisting of two all-new and two refreshed models. BYD does not provide any technical details in its latest announcement, however, there is data on the revised Tang EV, which comes from an announcement of the new model year for Norway. For the new model year 2021, the battery capacity will be increased from 82.8 to 86.4 kWh and the model will also be offered as a seven-seater. The new Tang EV is supposed to be able to charge from 30 to 80 per cent in 30 minutes, with up to 110 kW direct current. It is more usual to state 0 to 80 per cent or 10 to 80 per cent, so the 30 minutes here are not directly comparable with the specifications of other manufacturers, as it is only charging by a capacity of 50 per cent.

In the latest announcement, the Chinese company repeated the already announced safety features of the new LFP batteries, which are supposed to be particularly stable even when penetrated, put under pressure or on fire. In addition, according to earlier information, the space required for the battery installation is 50 per cent smaller than for a comparable NMC cell.


BYD says it is developing key components for the production of the ‘blade battery’ in-house. Specifically mentioned are “the production line and the equipment”. The company is currently ramping up production capacity to supply third-party customers, among others. “As leading global car manufacturers cooperate with BYD subsidiary FinDreams Battery, the Blade Battery will be successively installed in EV models of mainstream brands at home and abroad,” BYD says.

The first names are also already being traded: In mid-March, a Korean media report said that Hyundai Motor Group was in talks with BYD about supplying the LFP cells for its China models.