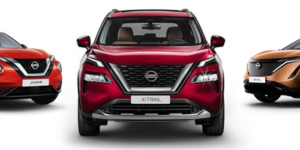 At the Auto Shanghai, Nissan presented the fourth generation of its SUV model X-Trail, which will also be available in Europe from summer 2022. Like the Qashqai, the new Nissan X-Trail is based on the CMF-C platform and will also be launched with the e-Power hybrid drive. Deliveries in Europe are expected by summer 2022.

In the e-Power hybrid, the petrol engine is used exclusively to generate electricity, while an electric motor drives the wheels. “This means the engine can always run within its optimal range, leading to superior fuel efficiency and lower CO2 emissions compared with a traditional internal combustion engine,” Nissan writes but did not give any technical data.

In the Qashqai, whose new generation was introduced in February, the electric motor produces 140 kW, the 1.5-litre petrol engine 115 kW. Nissan has not yet given any fuel consumption figures here. Even the brochure on the Qashqai so far only gives the consumption of the 1.3-litre petrol engine with mild-hybrid (6.4 litres/100km according to WLTP).

Besides, the Japanese announce an all-wheel-drive variant of the X-Trail, “which is ideal for excursions over rough terrain”. However, the announcement leaves open whether this will be a mechanical all-wheel-drive with an internal combustion engine or an all-wheel-drive version of the e-Power with a second electric motor on the rear axle, as is offered in Japan with the Nissan Note e-Power, for example.

Nissan will also be able to take some time with the final technical data and prices, as the fourth generation of the SUV model is not due to be launched on the European market until summer 2022. Despite the platform change to the CMF-C, an important feature of the X-Trail compared to the Qashqai, the fold-down third row of seats, is retained – the extended seven-seater version Qashqai+2 is no longer announced for the third generation of the Qashqai.

The X-Trail should then complete Nissan’s crossover transition in 2022. Following the debut of the second-generation Juke, the unveiling of the aforementioned Qashqai and the Nissan Ariya all-electric SUV. “The renewal of Nissan’s line-up continues at pace,” said Guillaume Cartier, chairman of Nissan’s Africa, Middle East, India, Europe and Oceania (AMIEO) region. ” It will offer more efficiency, refinement, versatility and user-friendly technology. And it will complement its electrified crossover cousins in the range, giving customers an outstanding SUV with an electrified powertrain for their daily needs.”