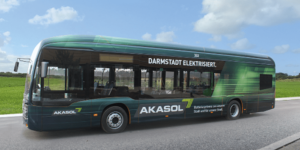 The battery system manufacturer Akasol has received another follow-up order from an unnamed “major European bus manufacturer”. The extension is initially until 2024, but with an option the deal could be extended for three more years.

The company will supply its ultra-high-energy battery systems for new electric buses from the long-standing customer from mid-2022 until at least 2024, with a total volume in the high double-digit million euro range, according to the statement. Should the customer exercise the extension option agreed in the contract, further battery systems would be delivered until 2027. Then the order volume would rise to a low three-digit million euro amount, Akasol said.

Akasol does not name the customer itself in the statement. In the past, the Darmstadt-based company has received numerous orders from the Swedish Volvo Group. However, a photo published by Akasol to accompany the announcement shows a Mercedes eCitaro in the green Akasol design.

The Darmstadt-based company is more specific about its own product. It is the new system “AKASystem AKM CYC”, which enables about 100 kWh per pack – thus the energy content is twice as high as in the battery system generations delivered to customers so far. According to Akasol, this should significantly increase the range and application possibilities of the vehicles.


CEO Sven Schulz sees the renewed extension as “a great vote of confidence in our extensive expertise in the field of powerful lithium-ion battery systems for electric buses”. “Our good and trusting cooperation with one of our first serial product customers has grown continuously since 2015 – not just as a supplier to Europe’s largest manufacturer of electric buses, but also as an integrated development partner for what is likely the most important component of the electric powertrain,” Schulz continues.

According to Schulz, the new generation of batteries will “probably be able to serve every city bus route” with one charging process per day, eliminating the need for rapid intermediate charging along the route. Alternatively, the batteries can also be used in intercity buses and coaches.

The battery systems from the order will be produced in Akasol’s ‘Gigafactory 1’ in Darmstadt. Currently, the last construction work is being done there before series production is expected to start in the middle of the year. The aim is to assemble 70 of the 100 kWh packs per day.

The factory can be expanded to up to 5 GWh depending on customer demand. “With the follow-up order, we will already continue to successively ramp up our production capacities in Gigafactory 1 over the coming quarters,” says Klaus-Dieter Nagel, Senior Vice President Operations at Akasol AG.