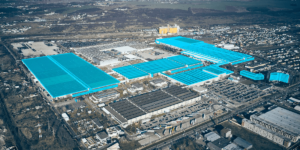 With the investment of the equivalent of 249 million euros, Craiova would be Ford’s third location in Europe where fully electric vehicles come off the production line – alongside Cologne in Germany and Kocaeli in Turkey. In Craiova, Ford currently builds the two small SUV models EcoSport and Puma. However, the production of a light commercial vehicle in the plant is not completely unknown: until 2011, the Transit Connect panel van was also built there.

The exact start date for production and “further product details” will be announced at a later date, according to Ford. It is possible that the model will again be the Transit Connect panel van or the even smaller Transit Courier (and their passenger car versions called Tourneo). Because it is clear that the two larger light commercial vehicles including the electric version, the Transit and the Transit Custom, will be built in Kocaeli.

“The Ford plant in Craiova has state-of-the-art capacity and enables competitive world-class production,” says Stuart Rowley, President, Ford Europe. “The investment in our Ford plant in Craiova now sends another signal and underlines our intention to provide European customers with suitable vehicles for an electrified future.”

Ford aims to make all commercial vehicle ranges available as fully electric versions or those with plug-in hybrid powertrains by 2024. By 2030, electrified variants are expected to account for two-thirds of Ford’s commercial vehicle sales.

Since Ford acquired a majority stake in the plant in Romania in 2008, the carmaker says it has invested nearly two billion dollars in the site. It currently employs around 6,000 people and has also been building an electrified vehicle, the Puma mild hybrid, there since 2019. According to Ford, the e-utility vehicle will also be the first fully electric car from Romanian production.

Volvo takes over majority of Designwerk