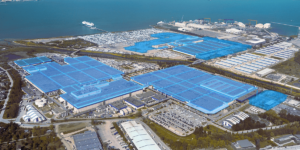 Ford has announced that the next generation of the Transit Custom series will include an all-electric model. The same applies to the Tourneo Custom passenger car counterpart. The vehicles will be manufactured at the Kocaeli site in Turkey from the first half of 2023. Ford is also building an offshoot for partner VW there.

The US company is not yet giving details of the two purely electric vehicle versions. They only say that in addition to conventional drives, mild hybrids and PHEVs, a battery-electric drive will also be offered in the future. Ford Otosan, Ford’s joint venture in Turkey, will manufacture all versions of the next Custom generation – including the new electric version. For its part, Ford recently announced plans to build a battery assembly plant at its headquarters to complement its electric vehicle production. The plant is to be completed by 2022. The large E-Transit for Europe, which Ford had presented in 2020, will then also be built there.

Ford is adapting to the other market participants to a certain extent with the introduction of a purely electric Transit Custom. This is because the plug-in hybrid as the manufacturer’s highest level of electrification to date, the carmaker is more or less alone in the five-metre van segment. The competition relies primarily on the dual of diesel and electric vans: Daimler with the e-Vito and PSA with the trio Opel Vivaro-e, Citroën ë-Jumpy and Peugeot e-Expert, to name just a few representatives.

Meanwhile, Ford is keen to emphasise the benefits of the hybrid variants for the future: It says it is aware that not all commercial vehicle operators will make the switch from conventional combustion engines to fully electric vehicles in one leap. “That’s why Ford is committed to a wide range of powertrain technologies from mild hybrid to plug-in hybrid, which will also be a key part of the product range in the next-gen Ford Transit Custom,” the company wrote.

Stuart Rowley, President of Ford Europe, is convinced that the next generation of the Transit Custom series, including the fully electric variants, will strengthen Ford’s position as the number one commercial vehicle brand in Europe. Ford had already announced in February that it would offer an electrified variant (BEV or PHEV) in every series of its commercial vehicle fleet from 2024. From 2030, these vehicles will then account for two-thirds of Ford’s commercial vehicle sales.

“Continued growth in Ford’s strong commercial vehicle business is key to its European profitability. It is supported by new products and services, working with an extensive network of commercial vehicle converter partners, with Ford’s strategic alliance with Volkswagen and its Ford Otosan joint venture providing cost-effective vehicle development and sourcing,” Ford writes. The company does not name the German carmaker in this context by chance. In its announcement, the US company mentions that “the next generation of Volkswagen’s 1-tonne commercial vehicle” will also be built in Kocaeli, Turkey, as part of the alliance with Volkswagen agreed two years ago. This likely refers to the VW Transporter. It is not possible to interpret from the sentence whether this will also have a fully electric drive. The press release only states that the cooperation between Volkswagen and Ford is aimed, among other things, at scaling effects that are to be achieved through joint vehicle platforms. This would enable both companies to bring more technologies to market more quickly.

By way of background: Ford and Volkswagen had signed contracts for their global alliance in the areas of electrification, light commercial vehicles and autonomous driving in June 2020. On this basis, Ford will also build its first electric model produced in Europe, among other things. This is based on Volkswagen’s modular e-drive system (MEB). Here, too, there is talk of a market launch in 2023.

Aiways has found a sales partner for Denmark