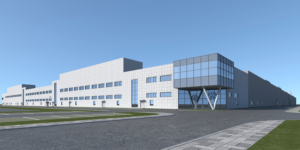 Volkswagen has started construction of a new MEB plant at Volkswagen Anhui in China. Following the completion of the Anting (SAIC VW) and Foshan (FAW-VW) plants, this will be the group’s third production facility for pure electric vehicles in China.

The plant is scheduled to be completed in mid-2022 and go into operation in the second half of 2023. In contrast to the two previous MEB plants in China, VW is calling the shots at this plant: at the end of last year, VW acquired a 75 per cent majority stake in the joint venture with JAC and renamed the company from JAC Volkswagen to Volkswagen Anhui. In the other two joint ventures, the Chinese partners still hold at least 50 per cent.

Volkswagen China does not name the maximum production capacity of the new plant in the announcement. It merely reiterates the goal of delivering around 1.5 million new energy vehicles – in VW’s case mainly battery-electric cars – per year in China by 2025. The plant in Anhui is to be 500,000 square metres in size, with the body shop alone covering 141,000 square metres.

The plant will be powered exclusively by green electricity and will contribute to supporting the group’s CO2 reduction target with several other measures, according to the statement. These include energy-saving underfloor heating in the office areas and efficient production machinery.

The announcement does not say which models will be produced in Anhui. Volkswagen Anhui has long been associated with the electric  small car based on an adapted MEB, of which there could be a VW offshoot (rumoured to be called ID.2) and a Cupra version. The memo says the Volkswagen Anhui model range will “fully cater to the preferences of young user groups and have an avant-garde, unique design and strong visual impact” – which could be seen as hinting at a city small car rather than a large SUV. It is also possible that more MEB models will be produced, with more models being unveiled by 2023.

However, Feng Sihan, Volkswagen’s China CEO, emphasises the local development centre – which in turn makes the production of specially developed vehicles likely. “Volkswagen Anhui will become the group’s global innovation base for electric mobility and help the group achieve its climate-neutral strategy,” says Feng Sihan. “China is the world’s largest domestic market for new energy vehicles We need to further improve local competitiveness. Volkswagen Anhui will play an important role in this.”

As VW mentions in one sentence, the project will also include plans to “build a park for battery and parts suppliers at the factory”. However, there are no details on this yet.