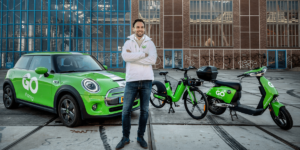 GO Green, the parent company of the Dutch e-scooter sharing provider GO Sharing, has raised 50 million euros in a new financing round. At the same time, the start-up announced that it has just launched operations in the Belgian city of Antwerp with 500 e-scooters.

GO Sharing is best known in the Netherlands where the provider says it has more than 4,000 e-scooters in use in 30 cities. At the beginning of April, the company expanded abroad for the first time to Vienna, Austria with 200 electric moped scooters. Now Antwerp is the next location outside the Netherlands.

When Go Sharing announced its expansion into Vienna at the beginning of April, the company said that the rollout was “realised within one and a half years thanks to a 10-million-euro investment”. Now, parent company GO Green has succeeded in raising new funds via a financing round of 50 million euros with participation from the investment company Opportunity Partners and the founders of GO Sharing. The existing shareholder Rabo Investments supported the new shareholder’s entry.

With the fresh investment, GO Sharing intends to expand further, add e-bikes and electric cars to its offering in the future, expand its service network and make greater use of smart technologies. For the planned international expansion, the provider is putting special focus on Germany, Great Britain and Turkey.

GO Sharing is diversifying its vehicle offering with multimodal sharing. E-bikes and electric cars are to be added to the electric scooters currently offered. The Nieuwegein-based company now employs over 30 people. GO Sharing benefits from the support of its sister company GreenMo, an electric moped sharing supplier based in the UK, which recently acquired a majority stake in the Dutch start-up ‘e-bike to go’ offering e-bikes by subscription. GreenMo also took over the Belgian company zZoomer that provides sustainable mobility lease solutions. GreenMo already rents out more than 10,000 e-bikes in the delivery sector and is expected to help GO Sharing expand.

GO Sharing CEO Raymon Pouwels explains: ‘Users will soon be able to book e-bikes and electric cars in our app, in the same way that they already book shared mopeds now. The e-bikes are a healthy alternative for short trips in the city. The electric cars can be picked up at strategically located hubs in the urban periphery, so that they become part of the journey between cities: an essential element in our mission to turn vehicle ownership into integrated shared mobility.’

Pouwels explains the planned market entry in Germany, Great Britain and Turkey, among other things, because the sister company GreenMo is already successfully active in these countries.