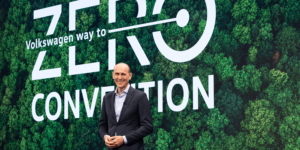 The VW brand has concretised its plans to decarbonise the company and its products. The company wants to be carbon neutral by 2050 at the latest. As a new interim target, CO2 emissions per vehicle in Europe are to be reduced by 40 per cent by 2030 – significantly exceeding the group-wide target of 30 per cent.

The base year for the above-mentioned percentage savings is 2018. On average, VW brand vehicles are to produce around 17 tonnes less CO2 in 2030. This will be made possible by the accelerated ramp-up of electromobility, but also by numerous measures in production and along the supply chain. These two points, as well as the operation of the vehicles, are to be made carbon-neutral. In addition, VW is focusing on battery recycling.

“Volkswagen stands for sustainable e-mobility for all. We’ve set out on the ‘Way To Zero’ and are consistently placing the environment at the focus of all our activities,” says Ralf Brandstätter, CEO of the Volkswagen brand. “Our big electric offensive was just the start. We’re taking a holistic approach to decarbonization: from production through service life to recycling.”

As Brandstätter emphasises, VW is the first carmaker to “support the expansion of renewable energies on an industrial scale”. By 2025, new wind and solar parks are to be built in various regions of Europe and together they will generate around 7 terawatt-hours of additional green electricity.

The first projects have already been contractually agreed upon with RWE. Specifically, this is to involve a solar plant in Tramm-Göthen in Mecklenburg, which is to have a total capacity of 170 million kilowatt-hours per year. According to VW, the plant, which is to be built by the end of 2021, will be the largest independent solar project in Germany: It is to be built completely without state subsidies.

The first measures for ID. vehicles are to be introduced this year: For example, battery housings and rims are to be made of “green” aluminium and low-emission tyres are to be fitted. “Ten focus components can reduce the CO2 balance of the ID. Family can be improved by around two tonnes per vehicle over the next few years,” the statement reads.

At VW’s first “Way to Zero” conference, where the plans were presented, Brandstätter did not justify the billion-dollar investment with climate protection as an end in itself. Similar to Volvo when presenting its circular economy plans, the VW boss also sees climate protection as a “real competitive advantage”. “In the future, employees, customers and investors will give preference to those companies which place their social and environmental responsibility at the heart of their business,” says Brandstätter. “Sustainability will thus become a crucial factor in corporate success.”