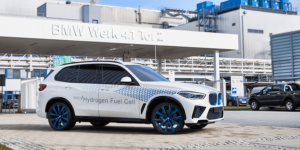 At BMW, preparations are underway for the small series of the BMW i Hydrogen Next based on the current X5, announced last year for 2022. While the fuel cells themselves come from partner Toyota, some core components are to be manufactured in Bavaria.

For the assembly of the small series, the carmaker says it is working with the Landshut Lightweight Construction and Technology Centre (LuTZ), which is to manufacture key components of the hydrogen drive for the BMW i Hydrogen Next and provide them for the further assembly of the fuel cell system in Munich. Preparations for the fuel cell system are already underway in Landshut.

For the small series, the Lower Bavarian site will manufacture components for the fuel cell assembly: the so-called stack housing made of light metal, in which the fuel cells are located, as well as the media pressure plate. This consists of plastic and light metal castings and serves as an airtight and watertight seal for the stack housing. Through the media pressure plate, hydrogen, oxygen and coolant are introduced into the housing to initiate the chemical reaction in the fuel cells.

The fact remains that this is still only a small series. BMW, which wants to offer its customers the “power of choice” in choosing the appropriate drive technology, had recently become somewhat quieter in its demands for technology openness. The current communication says that hydrogen vehicles will become “another option in the long term”.

That BMW customers will soon be able to order a fuel cell vehicle at the dealership (or online) is now ruled out by the carmaker itself. “However, the conditions needed to be able to offer BMW Group customers a hydrogen vehicle are not yet in place,” the statement reads. “Further commitment is necessary – particularly with regard to the hydrogen filling infrastructure and requirements throughout the entire energy system, where green hydrogen must be available in sufficient quantities and produced at competitive prices for individual mobility.”

The framework conditions for hydrogen fuel cell vehicles will develop differently around the world. BMW welcomes the plans of the EU Commission’s ‘Green Deal’ to focus on hydrogen technology. In addition, the Munich-based company emphasises the “high interest” of markets such as Japan, South Korea and China in developing a hydrogen infrastructure.