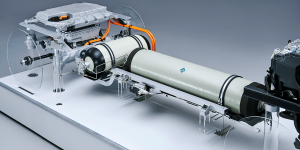 BMW has now revealed the first technical details of the drive system in the i Hydrogen Next concept that the manufacturer presented at the IAA 2019 on the basis of an X5. The manufacturer provides some data on both the fuel cell and the car’s electric drive.

The BMW i Hydrogen Next uses a fuel cell system that generates up to 125 kW and two 700-bar tanks that together hold six kilograms of hydrogen. The fuel cell itself is located in the engine compartment, the larger of the two hydrogen tanks is located lengthwise in the cardan tunnel. Another tank is mounted transversely under the rear seat, while the electric motor for a rear-wheel-drive is installed under the trunk.

The study will use a fifth-generation electric drive, which will be used for the first time this year in the BMW iX3. The drive power amounts to 275 kW, and if the electric motor requires more than the 125 kW that the fuel cell can provide, electricity is added from the peak power battery mounted above the electric motor.

“The electric converter located underneath the fuel cell adapts the voltage level to that of both the electric powertrain and the peak power battery, which is fed by brake energy as well as the energy from the fuel cell,” says Jürgen Guldner, Head of BMW Group Hydrogen Fuel Cell Technology and Vehicle Projects.

BMW has not yet revealed a targeted range for the concept, our German colleague from electrive.net speculated that with the hydrogen consumption of comparable models, it should be possible to cover at least between 400 and 500 kilometres in real terms. To further develop storage technology, BMW is participating in the hydrogen storage efficiency project BRYSON (BauRaumeffiziente HYdrogenSpeicher Optimierter Nutzbarkeit) research project of the Technical Universities of Munich and Dresden, Leichtbauzentrum Sachsen and WELA Handelsgesellschaft.

With the reveal of the data, the Munich-based company also announced that it would continue the cooperation with the Toyota Motor Corporation in the field of fuel cell technology, which started in 2013. Toyota is already launching the second generation of its Mirai fuel cell sedan on the market this year and is also working on other possible applications for the technology, for example in commercial vehicles.

The fact that BMW does not provide any further data on the i Hydrogen Next’s fuel cell beyond the 125 kW output is due to the fact that an important part of the technology originates from the cooperation with Toyota. The fuel cell stack and the overall system are, therefore “original developments of the BMW Group”, but the inner workings of the stacks contain a great deal of technical know-how from Japan.

In their English press release, the BMW Group says they have “no doubt as to the long-term potential of fuel cell powertrain systems” but that it will also be “some time before the company offers its customers a production car powered by hydrogen fuel cell technology. “In our view, hydrogen as energy carrier must first be produced in sufficient quantities at a competitive price using green electricity. Hydrogen will then be used primarily in applications that cannot be directly electrified, such as long-distance heavy-duty transport,” says Klaus Fröhlich, head of development.

BMW explains that the i Hydrogen Next is still a concept and not a series production vehicle with the “currently not yet suitable framework conditions.”