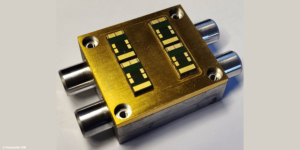 Together with Porsche and Bosch, a Fraunhofer team is developing new inverters for electric cars that will convert energy between the battery and motor more efficiently than before. The ‘SiCeffizent’ project’s focus is on cooling silicon carbide semiconductors.

The first increase in efficiency results from semiconductors made of silicon carbide (SiC) instead of pure silicon, as these have significantly lower losses when flowing through – the first series-production vehicles are already using SiC semiconductors. However, these are still quite expensive.

For this reason, the Fraunhofer IZM team, together with industrial partners such as Bosch and Porsche, considers it sensible to use as few transistors as possible. However, this poses new challenges: Since these few transistors would generate more power loss per unit and heat up more, they must be cooled particularly well. To keep the semiconductor cooler with the same power dissipation, the cooling elements of the inverters have now been completely redesigned.

SiC semiconductors with the new cooling are used in the inverters is no coincidence: high currents flow through this component between the battery and the motor during acceleration, recuperation and fast driving. “We expect that by optimizing the drive train in this way, the range of electric cars will ultimately be extended by up to six per cent,” says Eugen Erhardt, who is responsible for SiCeffizient at Fraunhofer IZM.

Another advantage of the new cooling solution: according to Fraunhofer-Gesellschaft, the thin metal plates can compensate for stresses during heating or cooling by deforming slightly. The different materials of the power modules expand to different degrees when heated, leading to material fatigue – but this should not be a problem with the new inverter.

In the coming months, the new inverter will be tested at the project partner Bosch. Porsche will install the device in a newly designed drivetrain that is fully adapted to the SiC structure. “We still have some way to go before the device is ready to go into production,” says Eugen Erhardt. “In the first instance, we are pulling everything together to create a prototype. The individual process steps will then need to be further optimized.”