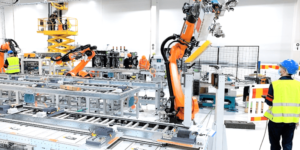 Valmet Automotive has signed a third customer contract within a short period of time for the production of battery systems at its plant in Uusikaupunki, Finland. The customer is an unnamed “well-known car manufacturer”.

After Valmet Automotive received a first order for the production of battery systems and modules from a major carmaker, the expansion of the Uusikaupunki plant into a battery factory was announced in December 2020 as the second location after the Salo plant. A second major order was already announced at the end of January 2021.

Meanwhile, installation of the production lines has begun at the plant. Production at the new battery plant, which is being built on the site of the existing vehicle plant, will start in the second half of this year.

“With bold investments, Valmet Automotive has quickly become a major supplier of battery systems to automotive OEMs. Already a third battery manufacturing contract for the new battery plant in Uusikaupunki within a short period of time is a strong indication that we are moving in the right direction and that Valmet Automotive has world-class competencies in battery systems,” said Jyrki Nurmi, SVP EV Systems. “The contract also is a sign of the continuous and rapid growth in demand for battery systems. Details of the new contract cannot be disclosed yet,” the company added.

The two Finnish sites will not be the only Valmet plants where battery systems will be assembled. In March, the Finnish company had announced plans to set up such an assembly facility in Kirchhardt, Baden-Württemberg. Again, following an order from a customer – Kirchhardt is close to Audi’s Neckarsulm plant.

Valmet has been focusing strongly on electromobility for several months and is not only investing in the expansion of production capacities. In October 2020, the company had announced that it was withdrawing from classic engineering services in order to focus more on e-mobility as a contract manufacturer and system supplier. Since then, another battery test centre has been commissioned in Weihenbronn (also in Baden-Württemberg), and the development departments in Germany have also been strengthened.