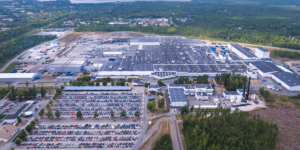 The Finnish supplier says the battery factory in Uusikaupunki is scheduled to start production later in the second half of 2021. Uusikaupunki is also home to a Valmet vehicle plant where the company builds vehicles for other companies as a contract manufacturer, including the A-Class and the GLC for Mercedes-Benz. The Uusikaupunki plant will continue to focus on vehicle production. The expansion is “an important step in the implementation of Valmet Automotive’s strategy to establish itself as a Tier 1 system supplier for battery systems and modules”.

The plant will be built in addition to the existing battery assembly in Salo. In parallel with the plans in Uusikaupunki, the battery assembly line in Salo that will become operational in October 2019, will be expanded.

Valmet Automotive says that the expansion is due to a new major customer. An unspecified, “leading” car manufacturer has appointed Valmet as a Tier 1 system supplier for a battery program. This will include the assembly of the battery systems as well as the production of the modules.

“With the decision to establish a high-volume battery system production in Uusikaupunki, we are opening a strong additional growth perspective to our largest and most important plant”, says Olaf Bongwald, CEO Valmet Automotive. “Combining car manufacturing and battery system production in one plant additional to our Salo plant nearby, we do not just offer a unique package to our customers, but also make an important contribution to protecting the environment.”

Valmet says it has been producing battery systems in Uusikaupunki “for years”, but so far only in small series focusing on industrial applications. The company also maintains a Battery Test Center (BTC) there. A few weeks ago, the Finnish company opened its second BTC in Germany. Another of these test facilities is located in Bad Friedrichshall, Germany.

Update 28 January 2021: Valmet Automotive has received an order from another major automaker to manufacture battery systems in Uusikaupunki, Finland. However, the Finnish supplier does not provide details.

This is already the second “secret” order for the plant, which is still under construction. As described above, Valmet announced in December that it would be adding a battery plant to its car plant in Uusikaupunki. Work is progressing as planned. Production is still scheduled to start in the second half of 2021.

The search for employees for battery production is to begin in the spring. Thanks to the two major orders, employment at the Uusikaupunki site is secure for years to come, Valmet says.