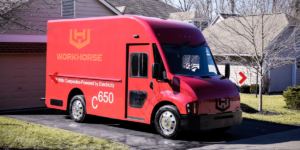 The US manufacturer Workhorse will use CATL batteries for its electric delivery vehicles in future. Workhorse now signed an agreement to this effect with Coulomb Solutions, the North American distributor of commercial vehicle battery systems from the Chinese manufacturer.

The CATL batteries will be used in Workhorse’s C-650 and C-1000 models starting this quarter. The two vans are 6.2 and 8.2 metres long respectively and have a load volume of 650 and 1,000 cubic feet – hence the model designation. Converted, these are a good 18 and 28 cubic metres respectively. On the Workhorse website, both vehicles are said to have a battery capacity of 70 kWh and a range of 100 miles (160 kilometres).

With the CATL batteries, however, the latter parameters are likely to change. According to Workhorse, distributor Coulomb Solutions (CSI) recently completed validation of the new 120 kWh lithium iron phosphate battery system in the C-1000 platform. They will begin supplying the corresponding battery systems this month. According to a company statement, the CSI/CATL battery systems selected by Workhorse will have an energy density of up to 160 Wh/kg – “similar to today’s NMC battery packs”. In addition, Workhorse says it was impressed by the low weight and “twice the lifespan of typical NMC batteries”.

“We chose the CSI/CATL battery systems because of their proven track record in commercial e-vehicles around the world over the last decade, their high safety levels and the wide range of commercial battery systems from 40 to over 600 kWh,” says Workhorse CEO Duane Hughes, citing further reasons. Customers benefit in the form of “overall better performance, higher payload capacity and an excellent battery warranty”.

CSI CEO David Mazaika points out that CATL’s LFP technology is rated for 4,000 cycles at 100 per cent depth of discharge at 1C and that CATL battery systems have already been installed in more than 330,000 electric commercial vehicles. CSI sees itself as a distributor and optimiser of battery system solutions to suit customers’ “drive system voltages and provide the desired energy capacities”.

Workhorse made the news in January with a major order for 6,320 of its electric delivery vans, to be delivered between July 2021 and 2026. The client is Pride Group Enterprises, which operates in Canada and the USA. The two models ordered are the C-650 and C-1000.

According to Workhorse, this is the largest single order for the US company to date. It is also a fact that the manufacturer has never produced larger numbers of its electric transporters before. In January, media reports revealed that Workhorse had originally only planned to produce 1,800 units for the current year. Workhorse did sell 1,000 electric delivery vehicles to UPS in 2018, but a potential, even more lucrative deal with the United States Postal Service “stalled”, Electrek reported. The Post had postponed its decision. Since January, however, the company has had a major order from another source.