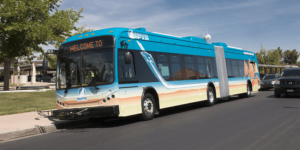 BYD announced that Antelope Valley Transit Authority is purchasing another 16 all-electric buses. The Chinese manufacturer is also increasing its presence in North America with a new service centre on the East Coast.

Staying west, to begin with, AVTA, which serves Los Angeles County and portions of Kern County, was among the first transit agencies to decide to go 100% battery-electric. Since then, AVTA has put 57 BYD zero-emission buses into revenue service. The 16 models now on order will grow the fleet to 73 once they arrive in Southern California.

The K7M seats 22, has a range of up to 150 miles and can be fully charged in 2.5 to 3 hours. The larger model can accommodate up to 89 passengers and has a range of 220 miles. BYD specifies charge times between three and four hours.

“BYD is proud to partner with AVTA as it shows transit agencies throughout California and the rest of the transportation industry how to transition from fossil fuels to zero-emission technology,” said Patrick Duan, BYD North America Senior Vice President.

AVTA is buying the K7Ms through a State of Georgia contract, a kind of buyers’ pool. BYD has similar statewide contracts for California and New Mexico.

The buses come from BYD’s Coach & Bus factory in Lancaster, California, just a few miles from AVTA’s headquarters. BYD says its zero-emission buses not only meet but exceed Federal Transit Administration ‘Buy America’ requirements, incorporating more than 70% US components. This may come in handy once the ‘Clean Transit for America’ comes to pass. The US government wants to provide 73 billion dollars to electrify public transit buses, delivery trucks and other vehicles in the country as reported.

BYD at the East Coast

BYD has also announced the expansion of its North American operations, with the opening of a service centre in Lodi, New Jersey. The centre, which is now hiring technicians, will provide quick access to parts, care, and expertise for BYD buses and trucks, claims the company.

The East Coast service centre can accommodate all of BYD’s battery-electric transit models and all of the battery-electric motor coach models, ranging from 23 feet in length to a double-deck 45-foot coach (7 to 13 metres). The facility can also handle the company’s medium- and heavy-duty battery-electric trucks, adds BYD.

In addition to the centre in New Jersey, BYD also recently opened a service hub in Indianapolis, Indiana, to serve Midwest customers. Clients on the West Coast may show up at a similar centre in San Carlos, California.

BYD claims there are more than 1,000 battery-electric buses built or ordered for US customers to date.